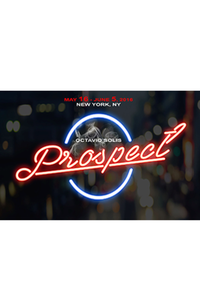 Boundless Theatre presents the East Coast premiere of Octavio Solis' play about a dorky computer programmer who tries to blow off steam in local Dallas bar and ends up having a night he'll never forget.

"'Prospect' is a simplistic idea in a small space expanded, made big, and made great by Solis’s dialogue, Elena Araoz’s direction, and the explosive, emotional, utterly human performances…Because it plays off such a simple idea, however, it runs the risk of dragging…The dynamic between the four leads is so strong, particularly as more is revealed internally about each character…'Prospect' pushes the envelope in unexpected ways, but it is, at its core familiar and minimalistic."
Read more

"A Sam Shepard play masquerading as an edgy neon-soaked catastrophe...These are severely broken and damaged individuals but with the tone and style set forth, it's hard to care about their needs...No matter how you slice it, Boundless Theatre Company’s 'Prospect' felt like a secret scene from a live-action 'Grand Theft Auto: Vice City.' Prospect featured designers proficient in their craft but the selection and subsequent vision of the production was lost in translation."
Read more

"Director Elena Araoz doesn’t let the charged atmosphere of danger slip, and keeps us strapped into the seat of the roller coaster with no escape from the exhilarating ride. She sticks her finger into the open wound of each of the characters’ vulnerability, inspiring formidable performances...It’s very cleverly done…Every element is perfectly in sync with rattling our senses so we experience a forceful jolt to our equilibrium. 'Prospect' is a portal into self-reflection and our notion of sin."
Read more