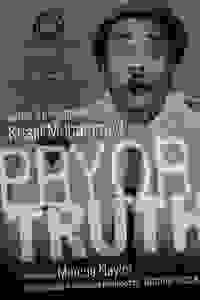 Part of FringeNYC: Pryor Truth, a one man show, is a celebration and introspection into the life and legend of comedian "Richard Pryor". Pryor Truth gives us a raw moment with one of the artist's most beloved characters: Mudbone.

FROM THE ARTIST:
Pryor Truth, a one man show that celebrates the life and legacy of comedian "Richard Pryor". Pryor Truth gives us a raw moment with one of the artist's most infamous characters: Mudbone.

See it if You love anything related to the late great comic-genius Richard Pryor.

Don't see it if Profanity is not your bag.

See it if You love a show that takes you on a up & down journey of the soul. Equal parts hilarious & heartbreaking. A must for any Richard Pryor fan.

Don't see it if Raw emotions disturb you. You were not a fan of Richard Pryor (obviously) and you can't handle the N word being used in comedy.

"Written and performed by Khalil Muhammad, 'Pryor Truth' is a sympathetic solo show about the comedian Richard Pryor. Its quest to illuminate is foiled, though, by that bane of biographical performance: tedious exposition of a life we know too well."
Read more

“A love letter to the legendary comedian Richard Pryor. The captivating Khalil Muhammad stars in a 90-minute solo show...Precise in both body and spirit, Muhammad brilliantly captures the essence of Pryor's most beloved creation; at times, there is an eerie feeling that Pryor himself is in the room. Hilarious and deeply personal, ‘Pryor Truth’ provides an inspiring reminder of the need to fight for honesty within ourselves.”
Read more

"‘Pryor Truth’ keeps the spirit of irreverence and truth telling alive in a jaw-droppingly uncanny performance by Khalil Muhammad…Muhammad’s performance is truly remarkable, capturing not only Pryor’s irreverent wit but also his underlying warmth...Through the narrative created by the show—surreal as it is—it becomes starkly clear how many insurmountable barriers Pryor had to overcome in his career... Just like Pryor captured our hearts, 'Pryor Truth' captures him."
Read more

"Fans of Pryor's films will surely find themselves in nostalgia-land. The problem with this piece is that Muhammad often is trying too hard here. His anecdotes about Pryor are fascinating, his jokes are good, but the delivery of his material is so fast and furious that it's tough to absorb it all in an hour...If you are a Pryor fan, you are bound to latch on to some of the jokes and skits…Honestly, this one-man show has profound moments. But it's too bad there aren't more of them."
Read more

"Khalil Muhammad’s impersonation of a Richard Pryor character as performed by Richard Pryor is uncanny, sure to appeal to prior Pryor fans. But the choice to focus in this way, while justifiable, does not make us feel the full force of Pryor’s comic gifts and his charisma. Maybe that wouldn’t be possible. It says something that the most compelling moment in 'Pryor Truth' for me was the video of the actual Richard Pryor singing."
Read more

"It’s an astounding piece of storytelling. Khalil Muhammad channels pure Pryor, and you cannot believe the uncanny resemblance to the star...It’s a genius concept...The magnificent observation of the character of 'Mudbone,' as played by Pryor, that Muhammad now portrays, is riveting. No gesture is left unutilized; every nuance is recreated and enhanced. You are watching a master craftsman in action, and it’s breathtaking...It’s a production that must get seen, by everybody."
Read more