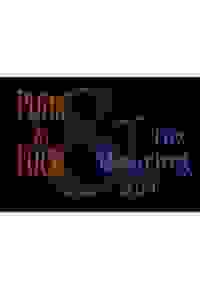 Two plays in rotating repertory: a Jacobean comedy entitled 'The Roaring Girl' and an emotional roller coaster of a coming of age story called 'Punk As Fuck.'

'The Roaring Girl' is a messy sex comedy that takes a hard look at marriage, gender, and fidelity, and finds a lot to laugh about along the way. It's filthy, it's romantic, it's transgressive, and plenty of sword fights.

Set in the era of grunge, alt-rock, and 90s punk, 'Punk as Fuck' is about a garage band that has gathered for a rehearsal that will end up taking them on an ride through their deepest secrets and hidden longings. This is a play with live music for anyone who has ever been young, angry, and in love.

See it if You enjoy a great night out

Don't see it if You don't

"It is so rare to find a costumed, thirteen-member Jacobean comedy anywhere in this city and if you’re into that sort of anomaly then you should definitely get thee to 'The Roaring Girl'. The swordplay is cool, the actors are enjoying themselves, and the songs are lovely...'The Roaring Girl' is probably best enjoyed inebriated so you can languish in each and every thrust, stab, and jerk. Just as was always intended."
Read more

"The raucous sex comedy is a robustly feminist work, which has surprisingly never received a major New York production until now. The cast and creative team are game to revive interest in the play, making for a brisk and lively evening of theater."
Read more

"Director Katharine Sommer succeeds in finding just the right actors for the roles. Everyone stands out...Aside from the nonlinear storytelling, 'Punk as Fuck' is very much a romantic drama in the vein of John Hughes, only in a punk rock setting. Anyone who that description appeals to will have a very good time at this show."
Read more

"Even if one is not familiar with the 17th-century dialect, the cast manages to inflect enough on every word that few will be confused as to what the characters are talking about. This is especially helpful for the show's laugh-out-loud humor. There are plenty of handsome lords and beautiful ladies in the cast, and all carry themselves with the sharpest of wits...While Jacobean plays aren't everybody's thing, this reviewer feels many should make an exception and try and catch 'The Roaring Girl'."
Read more