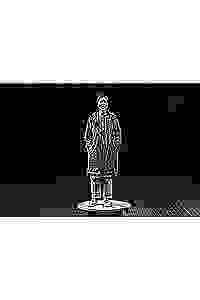 Richard Maxwell's new work is set in a near-future America, after a civil war has left the country reeling.

In an open room, Naz enters and stands on a pedestal. She describes living in a near-future America, after a civil war has left the country reeling. She tells of her town of Queens Row, Massachusetts, and of her only son who went looking for work in Odessa, Texas. He fell in love with a girl, killed a man in a jealous rage, and later, was killed by police. She grapples with her grief and keeping faith. Antonia enters and takes Naz’s place. Antonia speaks to her missing lover, updating him while living out of her car in Odessa. She speaks about their relationship and what independence means in her life. After mentioning the child they have made together, she sees a double of herself who is loyal to a fault. The space goes dark. Antonia exits the pedestal. In the dark, a third woman enters. The third woman is led to the pedestal by the other two. Soraya, the son and lover’s daughter, speaks in a broken way. She acquires communication as she is speaking. She tries to talk about where she stands in Las Cruces, New Mexico. She tries to talk about her parents in the early days, about people abandoning Queens Row, about how her father died, and about her lack of beliefs. She tries to talk about survival, happiness, and finally returning to Queens Row.

See it if you are a fan of Richard Maxwell's work & would like to see his latest variations on some longtime concerns & methods.

Don't see it if you are looking for a traditional drama with plot & interacting characters. Read more

See it if surreal, experimental theater; hypnotic monologues by 3 different woman who, as it turns out, are connected; takes place after a civil war*

Don't see it if if you don't want to be confused & want to leave the show knowing what happened & not saying "what was that about?' Read more

"Richard Maxwell on 'Life After Doomsday' In this stark, eloquent new play, three women reflect on what remains in the aftermath of an American civil war."
Read more

"What’s Over the Top at the Under the Radar Festival?"
Read more

"A compellingly strange if difficult hour of theater that rewards deep focus, even as it frustrates the logical, narrative-hungry part of your brain."
Read more