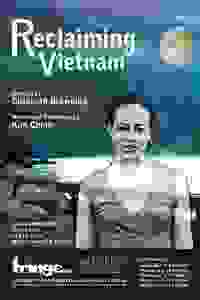 Part of FringeNYC: After rejecting her Vietnamese identity, Kim travels to Vietnam, the birthplace of her father. As she discovers the beauty of her roots, she is forced to combat the demons of her past, and learn the power of forgiveness.

FROM THE ARTIST:
A young woman arrives in the homeland of her father. Vietnam represents a part of her identity she has rejected for most of her life, wishing to be seen as an American (like her Caucasian mother) and not "the other" (like her Vietnamese father). A spontaneous moonlight ride on a motorbike ends in a crash and old memories surface. The play alternates between her present-day search for identity in Vietnam and flashbacks to her attempts to confront her personal history. Each experience strengthens her resolve to speak the truth and in the process, reclaim what was lost.

See it if Enjoy memoirs. Believes in forgiveness

Don't see it if Can't bear to listen to accounts of child molestation.

See it if you want a story that will leave you cheering and inspired by the boldness of the writer/performer. Beautiful & powerful – soul-filled story

Don't see it if you don’t enjoy autobiographical solo shows.

See it if The show and actress take you on a trip with her to both Vietnam and to her identity - unraveling heartaches and elation. Its an adventure.

See it if you want to see a powerful, meaningful and enjoyable performance !

Don't see it if you are not ready for, or can't process fully, adult content.

See it if You are entertained by a story of reconciliation with a story that tugs at your moral compass. It has a healing quality every performance.

Don't see it if If you are not interested in the human condition and the ability to grow and heal. If you are a cynic about hope & healing or other cultures

See it if You wish to see a powerful presentation, one that dares to confront challenging emotional, familial, and cultural issues.

Don't see it if You are triggered by references to child sexual abuse.

See it if You are sensitive, you are not afraid to face reality, you have ever struggled with identity or family dysfunction

Don't see it if You can't handle the truth

See it if The show is deeply moving. Kim's honesty is inspiring and beautiful!

“Chinh loosely connects the stories she tells, but rarely allows the writing to get specific enough for the audience to experience emotional catharsis of their own...Feels like a highly edited version of Chinh’s story, with the rough edges smoothed out. The emotions that drove her to finally connect with where her family comes from are never addressed, so much of the story lacks urgency...I was left with a lot of lingering questions.”
Read more

"A moving memoir piece…Kim Chinh exudes a quiet, elegant strength…Browning has directed this personal statement with sensitivity...She has assisted Chinh in telling this tragic story in a way that is uplifting as well as a call to action...There is incredible courage required to present an autobiographical work, and it’s great when the piece is elevated above sentimentality to expose hard truths through the power of good storytelling."
Read more

"It’s a complex story with a subject matter that’s not easy to tackle. beautifully directed by Elizabeth Browning...Chinh’s dialogue and lyrical storytelling sees our protagonist confronting her demons by speaking the truth...'Reclaiming Vietnam' is told with honesty and serenity, without a hint of anger. If one person’s story, told through theatre, can lead others on a personal journey to speak out on a subject that until now has been hidden, then it can only be a good thing."
Read more

"Kim Chinh has mastered the art of storytelling in her new one-woman show...She has the knack of being able to transport you into the heart of this country, feeling that you are travelling on this journey with her…Her movements are simple and understated, but this subtlety is what makes this show such a treat: they keep you captivated and on the edge of your seat, entangling you in her story. This is a raw piece which leaves you with a mixture of emotions."
Read more