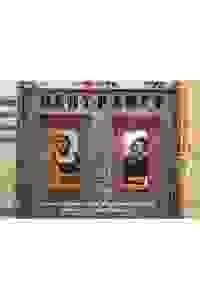 Set in Harlem in the 1920s, this new work invites you to follow Rose, Jenny, and Ricky as they help their mammas throw a rent party to save their home.

In the early 1900s African-Americans began to migrate north in large numbers. Harlem was where their community was, so many moved there, despite the high rents. Rent parties became a popular way for families to raise the rent money they needed. They would hire a musician or band, get cheap refreshments and charge a small entry fee.

An innovative toy theater fills the stage, a replica of a Harlem block from the 1920s. Lights flicker on as people awake. We see toy theater puppets, shadows come to life in windows, and at a certain point the whole set transforms. All the while actors frolic in 20s costumes, original saxophone music plays through the speakers and a cat does back alley beat poetry. We’re transported in time to an era poignant and pivotal to the African-American experience in this country and people of all ages should know these stories, hear these words and listen to this music.

See it if you'd like a slice of African-Americana; you appreciate the artistry & creativity involved in puppetry and animation.

Don't see it if you only want to see a "real" play rather than a puppet show, though it's not the traditional type of puppet show. Read more

"'Rent Party' is billed as a show for the whole family, but it will be of real interest primarily to preteen children. At that, it seems a rather dull outing. The actors here tend to speak in a sing-song-y manner. Very little humor or visual excitement ensues."
Read more