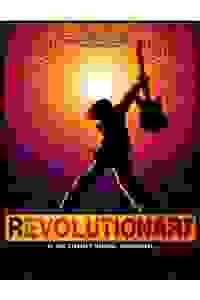 A sci-fi, acoustic rock musical about a conscious revolution in the near future, as seen through the eyes of young homeless musicians. Part of Theater for the New City's Dream Up Festival.

REVOLUTIONARY is a sci-fi, acoustic rock musical about a conscious revolution in the near future, through the eyes of young homeless musicians. Life on the streets of New York is not easy for these kids. Some fall into drug addiction and prostitution, while others face different perils, like police brutality. When one of them is arrested by a robocop and carted off to a FEMA camp, the others take refuge at The Source Center, in an old, abandoned church. While there, they become entangled in an underground revolution to help fight the encroaching fascism. As part of their indoctrination into the movement, they undergo a series of training and initiations that empower them to become spiritual rebels to help save their world from martial law. They are guided by the charismatic leaders of The Source Center, who help the homeless youth, heal their addictions and activate to Fifth Dimensional Consciousness, through meditation, therapy, and Ayahuasca ceremony. Their lives are forever changed, and in their newfound freedom, some of them enter into romantic relationships with people they never have thought they would. Together they all become the personification of the evolution of the revolution, as they shift into a new paradigm here on Earth.

See it if you'd enjoy new work with potential that has a lot of energy by a mostly young cast, singing, playing instruments and acting on a bare stage

Don't see it if you expect perfection - here the acting, singing and choreography are uneven and the music has mostly the same tone throughout. Read more

See it if you miss hippies and the New Age. Sweet multi-racial cast in post robot apocalypse La Boheme done with minimal sets and interesting costumes

Don't see it if you have issues with police brutality (one short scene). This is a would be big musical being done in a stripped down mode.

See it if Story is interested, with singing and music. Has a touch of the 60's.

Don't see it if You want a perfect show. Read more

See it if Some of the singing is good, though the songs themselves aren't great. Weird dystopic/New Age vibe. Might be of appeal to someone. Not me.

Don't see it if The cast are good, but the play isn't. It's not exactly BAD, but I wish I'd stayed home instead of going. Learn from my mistake.

Don't see it if you dont want gto be entertained

See it if If you like shows about revolutions and misfits banding together.