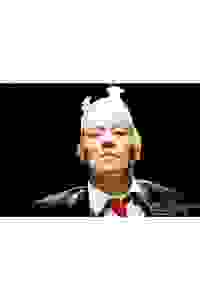 Part of FringeNYC: Richard III. An Audience. Anything can happen. What part will you play? Pushing the boundaries of Shakespearean performance, Brite Theater presents their multi-award-winning one-woman show in its US premiere. "In a league of its own" ***** - Broadway Baby


FROM THE ARTIST:
Pushing the boundaries of Shakespearean Performance, Brite Theater have re-imagined Richard III as a bold and engaging one-woman show. The fourth wall has been utterly obliterated, as you the audience take on the roles of all the other characters at Richard’s party in this intimate, exciting and moving production. Let Richard entertain you…but will you survive?

Touring internationally and throughout the UK since May last year, this electric and innovative adaptation of Shakespeare's classic has thrilled audiences and reviewers alike. From winning all three awards at Prague Fringe 2015 to selling out shows at Edinburgh Fringe, this 'immersive' and 'captivating' performance just keeps on attracting attention and esteem. It's more than a one-person show, it's an opportunity for the audience to be part of Richard's court and they have responded with passion and vigour fit for the king.

The show started its journey in director Kolbrun Sigfusdottir's hometown of Reykjavik, where she and Emily Carding worked in residency at Tjarnarbio Theatre, creating a new adaptation of the play. Since May 2015 our immersive take on Shakespeare's masterpiece has travelled to Prague, Plymouth, Bristol, Edinburgh and most recently Rome, Verona, and Brighton, with Act Alone festival in Iceland just before we bring the show to New York Fringe this summer, for its US premiere.

See it if You love unique Shakespeare adaptations and masterful acting.

Don't see it if You don't like interactive theatre.

See it if you are comfortable enough with yourself to sit close to an actor embodying one of the most wretched, murderous narcissists in history.

Don't see it if you're a Shakespeare purist without game or a sense of humour.

See it if you love creative interpretations of Shakespeare

See it if You want to challenge your knowledge of the Bard.

Don't see it if You're locked into the idea of how things should always be done.

See it if You want to see an original approach to the play and don't mind a small amount of participation.

Don't see it if If you are a Shakespeare purist and hate interactive theater.

See it if Audience participation where you are in the play but not in too deep. Delightful interplay. Also Shakespeare in an hour.

See it if you want an original take on Shakespeare in an intimate setting; you enjoy interactive theatrical experiences; you want to laugh.

Don't see it if you are made uncomfortable by audience involvement or don't enjoy Shakespeare.

See it if You love Shakespeare and are looking for an original take on a brilliant classic.

Don't see it if You dislike audience participation or have trouble with Shakespeare. It can also be confusing if you're not familiar with the original.

"There I was, among two dozen audience members assigned to play the other characters opposite Emily Carding, who takes on the title role in this British import. We did not have to memorize lines or even repeat them, given that Ms. Carding essentially used us as human props in the hourlong monologue adaptation she has devised. Still, it’s an entertaining way to dress up a solo outing, and Ms. Carding’s coolly psychotic king has a Tilda Swinton-esque flair."
Read more

"This is 'Richard III' stripped down to its barest element—the connection between audience and actor. When Richard and the audience click, it’s electric. Emily Carding has the power to change the tone of the room with just the look of an eye...Though it has a bit of a shaky start, 'Richard III (A One Woman Show)' is an undoubtedly unique ride through this classic tragedy."
Read more

"Emily Carding plays the infamous Richard III with insight and intelligence, and nails his unique blend of malice, sociopathy, and charm...but what makes the show truly shine is its interactive quality…Carding handles the variety of reactions masterfully throughout, maintaining focus on Richard and his story…It's good enough that it deserves to get a second look off-Broadway, and in my opinion ‘Richard III’ is one of the best Fringe shows in 2016."
Read more

"Shakespeare’s most calculating villain does all of the talking while keeping the deadly matter of succession fun. In addition to being a good host, Richard is also a great storyteller...A monologue version of ‘Richard III’ works well to start with because he always lets the audience in on what he’s thinking. With 'Richard III (A One Woman Show),’ he allows them to get closer, whether they want to or not, and it’s okay, because it also means getting closer to Shakespeare.”
Read more

"Without anyone else saying a word, she uses body language, verbal expressions, and in general superb acting to imply what the dialogue of the other characters is supposed to be. The resulting interactions are hilarious...Carding’s Richard is a witty, conniving, elegant creature. As a whole, the production works perfectly, with the rise of the duke and fall of the king coming together in a show that never lags for a second...An absolute success.”
Read more

"A smart, sparse, stripped back version of the text…Veering between oleaginous charm and gleeful malice as he ascends to power, then disintegrating into paranoia once he has seized it, this feels like a properly dangerous Richard…The piece works better in some scenes than others…Paring back the text to one speaker means inevitably some of its richness is lost...But overall, the approach pays off, creating a potent distillation of one of theatre’s greatest villains."
Read more

"Emily Carding’s portrayal of the king who murders his way to the English throne is in a league of its own. Her performance is electric, perfectly capturing Richard’s manic glee as he executes foes, friends and even his own family…This innovative, daring re-imaging of the text means that there's a sense of danger as Richard’s schemes escalate...We are invested and involved in this performance like no other; and what a performance it is."
Read more

"Carding is hypnotically mesmerizing as Richard in a production that perfectly showcases the sheer breadth of her talent as well as her knowledge of Shakespeare. This is Shakespeare unlike anything I have ever experienced before and is truly a fully immersive experience…It is hugely exciting to see Shakespeare brought to life in a way that still has the power to entrance. Whilst never taking away from the sheer brilliance of The Bard's writing, Carding's performance serves as an example to all."
Read more