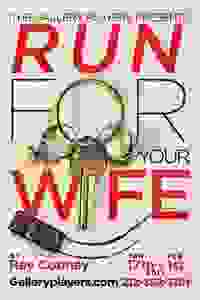 View in admin
Run For Your Wife
NYC: Brooklyn
91
Score it Scored!

Run For Your Wife NYC Reviews and Tickets

Gallery Players presents this British comedy about a cab driver who has two different wives - one in the country and one in the city.

A London cab driver, John Smith, literally has two lives, complete with two different wives, Mary and Barbara. Somehow, he manages to juggle them both without arousing suspicion. However, he gets caught up in a mugging, and wakes up in a hospital. He ends up with the wrong wife by his side, and is forced to deal with explaining things to both of his wives and the police all at once.

See it if funny as hell, one laugh after another. It never lets up and keeps you interested the whole way through. Had me doubled over at one point.

See it if THIS PLAY CAN BEST BE DESCRIBED AS ZANY.THE CHARACTERS KEPT YOU IN STITCHES.THERE WAS NO TIME THAT I WASN'T LAUGHING.FROM THE BEGINNING TO T

Don't see it if IF YOU ONLY LIKE BROADWAY PRODUCTIONS AND AN UNKNOWN CAST. Read more

See it if you enjoy thoughtful, absorbing family dramas with political undertones. Dark humor abounds and the acting and writing is stellar.

Don't see it if you are looking for a light, breezy drama have little interest in family dynamics or the history of Israel.

See it if This is a classic British sex farce with split second timing and a universal premise.