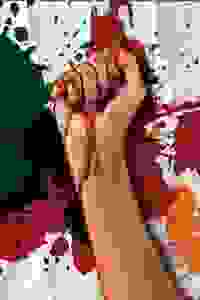 View in admin
Scenes from an Execution
NYC: Chelsea
88
Score it Scored!

Scenes from an Execution NYC Reviews and Tickets

The Potomac Theatre Project revives the story, by Howard Barker, of a Venetian painter and her collision with the Doge of Venice.

1571. Venice has won an overwhelming victory in The Battle of Lepanto. The artist and sensualist Galactia is chosen to commemorate the triumph; instead, she fills a staggering one thousand square feet of canvas with violence, suffering and death. Another battle ensues between artist and state, with Galactia unremitting in the face of extreme adversity.

See it if You like thought-provoking plays and are a fan of text/language rather than looking for fancy sets, costumes, and lights.

Don't see it if You're looking for light, mindless entertainment.

See it if You love Jan Maxwell and some of the best acting you will ever see on an NYC stage.

Don't see it if You don't like darker, edgy pieces in a black box style theatre.

See it if you enjoy theatre that not only exhibit's brilliance, but radiates it from within. It is a timeless story about art, politics and betrayal.

Don't see it if you lack imagination or emotional depth.

"Jan Maxwell, who recently told Playbill that she was retiring from the stage, is providing audiences with a heartbreaking display of what they’ll be missing when she’s gone. I’d almost call her work in this first-­rate production, the performance of her career...you had better make haste to observe this study of what one character describes “as a meteor cleaving her way through dark places” before it vanishes from sight."
Read more

"Fortunately for director Richard Romagnoli, whose leading lady dwarfs the rest of his lackluster company, Barker writes Galactia as a mythically imposing figure, swallowing up everything that impedes her path to truth and creative fulfillment...The result is a thought-provoking and surprisingly accessible exploration of the line between art and artist, the divide between artist and audience, and the everlasting moral battle between personal integrity and, the art of making art."
Read more

"If the current revival of Howard Barker's 'Scenes From An Execution' is Jan Maxwell's stage acting swan song, she is certainly going out spectacularly...Director Romagnoli's intimate production features a fine ensemble, with visuals that nicely serve the darkly-humored text."
Read more

"An absolutely gripping and often surprisingly funny evening of over-the-top theater...Richard Romagnoli directs all of this mayhem with complete assuredness, and while Ms. Maxwell stands at the center, the rest of the cast is equally up to the intellectual lunacy that prevails. And for a small production of a major play, much consideration has been given to the lighting design and the sound design. With 'Scenes from an Execution,' PTP/NYC absolutely lives up to its reputation for providing exciting and provocative theater."
Read more

"Under Richard Romagnoli’s meticulous direction, the ensemble cast of this remarkably enduring and ever relevant play deliver captivating and riveting performances...Mr. Barker revels in exploring the mythos of womankind and his retellings of stories about powerful women are replete with delicious moral ambiguity and resounding shadows."
Read more

"It is the emotional, superb performance by Jan Maxwell, whose last role makes this a tragedy. This is acting at it’s very best and should not be missed...Richard Romagnoli directs this production with a subtle fierceness that pierces the idea of being caged...This is a must see!"
Read more