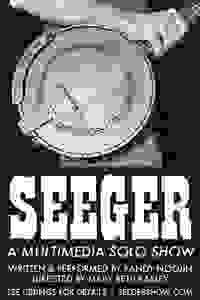 Part of FringeNYC: Sing-along with folksinger/activist Pete Seeger at a benefit for U.S.-Cuban normalization where he uses his greatest songs to tell of his adventures with McCarty-era witch-hunters, the Blacklist, Peekskill riots, and how a sailboat helped clean the Hudson.

FROM THE ARTIST:
After touring his solo show about Woody Guthrie, Hard Travelin' with Woody (www.HardTravelinShow.com) all over the country, Edinburgh, Mexico and Canada, Randy Noojin brings us SEEGER, a new multimedia solo show about Pete Seeger. Sing-along with Pete for free speech and unity at a benefit for U.S.-Cuban normalization where he uses his greatest songs to tell the story of his battles with McCarthy-era witch hunters, the Blacklist, fascists at the Peekskill Riots, and how a sailboat helped clean up the Hudson River!

Don't see it if you don't enjoy singing along.

Don't see it if If you think the House Un-American Activities Committee and Joe McCarthy were doing God's work. No, Y'know what? See it anyway.

See it if You're a fan of folk music of the 50's, and 60's, want some history interwoven with your entertainment and appreciate big talent.

Don't see it if If you were a fan of Joseph McCarthy, Roy Cohn, and the U.S. House Committee on Un-American Activities. You won't like it!

Don't see it if you don't like folk music

See it if you want to sing, laugh, and learn about pop culture and politics in the era of McCarthyism

Don't see it if you're not a fan of audience participation, or if you hate banjos!

Don't see it if you aren't interested in honest work

See it if You want to learn more about Seeger and hear his most beloved songs.

Don't see it if You don't want to sing along

"There is little nuance to the singer as a personality, nor is there much of a plot. Because Noojin places Seeger on a pedestal, it is almost impossible for him to provide a truthful portrayal of the man...'Seeger' is great fun if you know your mid-twentieth-century folk music and are looking for some sweet nostalgia, but if you’re seeking a dynamic story, then this one-man show may leave you wanting more."
Read more

"While the sing-alongs were heart-warming, it was when Noojin shared the particulars of Seeger's life story that the audience really leaned in. Noojin pinpoints some of Seeger's life-changing moments…True, Noojin isn't saying anything strikingly new about Seeger in his solo show. But how he says it is memorable. Anybody who is a Seeger fan should make a bee-line for the Huron Club, where this song-fest is humming."
Read more

“Pete Seeger may have been taken from us over two years ago, but Randy Noojin brings him so much to life in his solo show it seems as if the great singer and activist never died...Should not be missed by anyone who loves Seeger or good music or our right and duty as Americans to stand up for justice...Seeger believed the right song at the right time could change history. ‘Seeger’ shows that the right show at the right time can make your day.”
Read more

"Noojin came on stage and effectively resurrected Pete Seeger. Not only is he a dynamite folk singer who performs around a dozen Seeger classics, he's written a brilliant script that perfectly captures the spirit, personality, and passions of Seeger. There are thousands of creative decisions that go into a show. In virtually each case, Noojin has somehow managed to make the perfect choice...Not only the finest musical of the festival, but a stellar production ready for a commercial run as is."
Read more