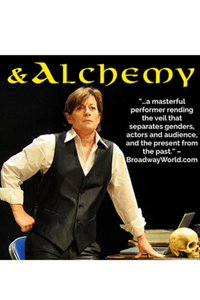 View in admin
Shakespeare and the Alchemy of Gender
NYC: Soho/Tribeca
86
Score it Scored!

Shakespeare and the Alchemy of Gender NYC Reviews and Tickets

In this autobiographical solo show, Wolpe plays Hamlet, Richard III, Shylock, and other great male characters created by the Bard, while also incorporating tales from her own dramatic life. Wolpe, the Producing Artistic Director of the all-female LA Women's Shakespeare Company, is an activist as well as a celebrated actress and director. Her work seeks to liberate us from the gender box of expectations. Presented in repertory with 'Macbeth3.'

See it if You want an expertly crafted play that weaves Shakespeare into a memoir that never feels narcissistic. You're familiar w/Shakespeare.

See it if to see an expert interpretation of Shakespeare's words interwoven into real life's tragedies & joys. Lisa Volpe is amazing!

Don't see it if You cannot accept gender transparency in the interpretation of Shakepeare's works. Talk about the Holicaust horrors makes you uncomfortable.

See it if You want the clearest, most nuanced & masterful, truthful, layered & spiritual contemporary Shakespeare you'll ever hear; the purest theatre

Don't see it if The actor's tools of voice and hand and heart and soul and truth, or clarity and language alone don't fit into in your theatrical philosophy

See it if You'd enjoy and appreciate a wellcrafted and well-acted memoir adeptly weaving Shakespeare samplings with personal history. Conversational.

Don't see it if You aren't familiar with Shakesoeare, dislike solo or memoir-style shows, or are illiberally judgmental about women playing men's roles.

See it if Want to experience the depth and humanity of Shakespeare. Ms. Wolpe's performance is masterful, eloquent and real. You will be moved.

Don't see it if Just see it.

Don't see it if your eyes glaze over at the mention of Shakespeare.

See it if If you are interested in how Shakespeare is relevant even now, like biographical family drama and have an interest in the holocaust.

Don't see it if If you don't enjoy gender bending. Are not interested in self revelatory drama or don't like Shakespeare or holocaust themes

"As a piece of theater, it feels more like a lecture, delivered with the house lights up but curiously absent of intimacy...The alchemy of gender the show’s title mentions is more evident in Ms. Wolpe’s stories than in her channeling the words of Richard III or Henry V...There are interesting glimmers throughout the show. More often, though, there is a self-help vibe to the proceedings."
Read more

“Ms. Wolpe demonstrates a fluid physicality and a soothing vocal expressiveness. Wolpe quite adeptly offers rich characterizations of some of those most illustrious roles. In addition, she seamlessly switches to delivering revelatory reminiscences and concise analysis of the plays with elan that recalls Spalding Gray’s monologues. The combination of these elements yields to a wonderful performance.”
Read more

"It is impossible not to be touched by her heartfelt performance. The audience gains insight into what makes Shakespeare’s male characters so liberating for her to play and how her slowly unraveling family tragedies helped reveal Shakespeare as a humanist…Even for audiences who have never experienced similar situations to Wolpe, there is something that appeals to all...It’s like group therapy, where you leave enlightened and liberated."
Read more

"Wolpe brilliantly owns the stage and each of Shakespeare's male characters that she brings to life are done so with the power of reconnection…It is Wolpe's spin and understanding of the texts as well as the characters that make each scene she does have depth and purpose…It’s a tall order for any performer to be writer, actor and director of their one woman show but Wolpe was clearly undaunted by the task."
Read more