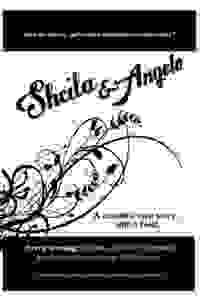 Part of FringeNYC: Set in a senior citizens' village, this hilarious and insightful love story with an unexpected twist explores the tribulations of growing older and... the alternative! Features SAG winner Dan Grimaldi leading an all star NY cast. Must See!

FROM THE ARTIST:
Sheila and Angelo is unique among the Fringe Festival entrants as all of the main characters, except one, and the first time produced playwright are 65 years of age or older. A comedic love story set in a South Florida retirement community, it deals with active seniors coming to grips with the reality of aging and the alternative. Serious subjects, such as the right to die with dignity and the state of health care in America are touched upon. The play has a flow that alternates between comedy and tragedy. Previous stage readings have brought about robust laughter and actual tears at the end for many of the audience members. If you love a good laugh, a good cry, or both this play is for you.

One of the advantages of working with seniors is you get to cast seasoned veteran actors in meaty roles that will let them shine. My lead, Dan Grimaldi, is a SAG award winner supported by the veteran cast of Lynda Rodolitz, Ed Kershen, Simone Lazer and ex-Playboy bunny, Judy Bruno Bennett. This fine cast is being directed by Michelle Kristine Best who holds an MFA from The Actors Studio at the New School University.

Don't see it if You are an intelligent, educated, sophisticated Jewish or Italian Baby Boomer residing in southeast FL-insulting and depressing

See it if you have concerns about an elderly parent or yourself, and if you like a good love story.

Don't see it if age and death frighten you, or you don't like Florida.

See it if Certainly anyone over 60 or anyone else hoping to live long enough to get old. Funny and romantic with very experienced actors.

Don't see it if If you don't intend to get old. or hate great acting.

See it if You Understand the "florida" scene and want to laugh out loud a lot.

Don't see it if You're Very young.

See it if You can relate to the indignities, challenges, and amusements of aging in today's world. And find heartfelt emotion in an unlikely couple.

Don't see it if You don't understand older people and their problems; or you don't have a heart.

See it if you love good, strong, fun characters and their relationships with each other.

Don't see it if you don't like to laugh and have a good time!

See it if You like plays that deal with the human condition artfully written and presented with great humor. Touching yet funny with a fabulous cast!

Don't see it if You don't like to laugh or deal with reality!

See it if See it. Period. You are going to grow old. Or you have a loved one who already us old! VERY thought provoking.Humor as catalyst gets U there

Don't see it if Life's negatives weigh heavy on you.

"The show accurately captures both the humor and anguish of growing old. The script is clearly new, with a few pacing problems in the middle and an ending that seems to hit very suddenly, but Raio’s vision is clear and manages to reach even the hearts of those too young to fully empathize with what’s at stake. The performances are hilarious and touching, with special mention to Grimaldi and Rodolitz...This new play shows great promise."
Read more

"'Sheila and Angelo' is a love story that tangos with death. A noir comedy, playwright Nick Raio will tug laughter and tears simultaneously from you...Emmy-winner Dan Grimaldi and Lynda Rodolitz are well-matched as the love-birds here, and the supporting actors are all sturdy in their roles. Directed by Michelle Kristine Best, this play looks death right in the eye and doesn't flinch an inch."
Read more

“One wonders why Mr. Raio wrote this play and why he would choose to produce it. One further wonders why it could possibly have been accepted into the FringeNYC 2016 Season. It is offensive from beginning to end and is no more than a wobbly series of hackneyed jokes strung together with the hope that a story about a dying spouse might somehow salvage the mess...The staging by Michelle Kristine Best is at best amateurish and puerile.”
Read more