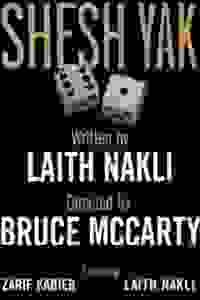 Rattlestick Playwrights Theatre present this play about the conflict between two Syrian men meeting in NYC during the 2011 civil uprising in Syria.

It’s spring of 2011, five weeks into the civil uprising in Syria. Jameel, a Syrian-American writer is in his New York apartment waiting for a houseguest to arrive from DC. An older Syrian expatriate and a leader in the anti-Syrian government movement, Haytham, has come to New York on business. Jameel is overwhelmed with excitement to have someone of Haytham’s stature in his home and the two share stories from their younger days in Syria. An unclear tension arises, leading them into a re-examination of their lives and a revelation of how their different pasts have intertwined and forced them into choices that neither ever imagined.