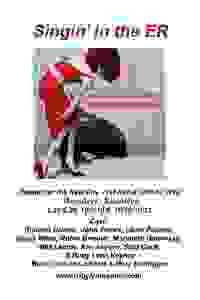 View in admin
Singin' in the ER
NYC: East Village
49
Score it Scored!

Singin' in the ER NYC Reviews and Tickets

Ruby Lynn Reyner directs and appears in her musical satire, "Singin' in the ER," a bad trip to the hospital that's performed in Playhouse of the Ridiculous style.

The piece is inspired by ordeals in a New York City hospital suffered by the author and her husband. Now she believes that the only way to deal with such life changing experiences is through unrestrained, exorbitant laughter. The score includes the song, "Biggest Balls in Town," written by Reyner and Jackie Curtiss. Ms. Reyner was a star of Vaccarro's Playhouse of the Ridiculous, appearing in "Conquest of the Universe," "Heaven Grand In Amber Orbit" and "Trilby in La Bohemia" (Drama Desk Award for Acting), among others and starting her well-known band, Ruby and the Rednecks, with musicians she worked with in the Playhouse.

See it if You dont take life serious. Have like a few good laughs.

Don't see it if Not a long show about 50 minutes. Read more

See it if You like farce musicals w/characters like Dr. Shlong. Large fun cast & wacky comedy. Lady w/arm falling off is told to "stop complaining"

See it if If you appreciate very amateurish hard working folks doing their best but lacking in talent.

Don't see it if You have no patience for unprofessional untalented work, however well meaning it is.

See it if You're looking for a show that reminds you of off Broadway in the 70s.

Don't see it if You want to see a big Broadway musical.

See it if if you know someone in the cast & as a friend, you have to go to support them

See it if You enjoy bad theater because this one is really bad. It looks as though it was improvised on the spot by a cast that was just assembled.

Don't see it if You don't like bad theater (see above).

See it if Just don't. Terrible play. One of the worst I've ever seen as a Show-Score member. Don't know how this got produced.

Don't see it if You have anything better to do.