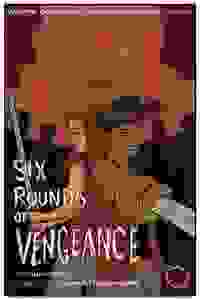 A post-apocalyptic Western about a young woman named Jess December who vows revenge for the death of her sister using the one thing she has left: a single gun with six live rounds.

In a post-apocalyptic "Lost Vegas", an ex-lawman enlists the help of a young swordstress and her cursed strongman to help avenge the murder of his lover. However the gang they'll be going against has powers that go way beyond just gunpowder and steel. To get revenge, they may have to become just as blood-thirsty as the monsters they're facing.

"The show has way too much plot...The action is energetically directed, with fight scenes punctuating the end of each round...They haven’t found a way to make more serious passages as compelling as the blood-soaked ones, leaving you antsy for the next altercation...Mr. Nguyen writes in a feverish, pop-culture-addled style. Not all of the actors can make his dialogue sound plausible. "
Read more

"Overflowing with awesome stage combat and imaginative writing, this show packs a huge theatrical punch in just under 90 minutes...They compensate for occasionally stilted line-readings with incredibly physical performances, hurtling across the stage and slamming into the floor...As far as stage spectacle is concerned, 'Six Rounds of Vengeance' is the best value in town."
Read more

"This show has ways of getting your attention. Picture frames held up in front of the performers gleefully mock the edits from what may be your favorite exploitation films...Even if you’re in the habit of wolfin' down these kinds of films, this very special theater experience will keep you on the edge of your seat. "
Read more

"It takes some time to get used to the extreme campiness of 'Six Rounds of Vengeance,' but once you're committed this play is a blast...the show is nonstop action, with clever stage combat choreography that runs the gamut from knife throwing to capoeira. And though the inclusion of literal comic book frames during battle sequences is at times awkward, that is all forgiven in its fantastically designed final boss that you will have to see to believe."
Read more