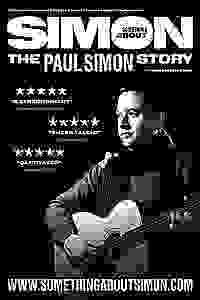 View in admin
Something About Simon - The Paul Simon Story
NYC: Soho/Tribeca
80
Score it Scored!

Something About Simon - The Paul Simon Story NYC Reviews and Tickets

Paul Simon is a name that has cemented itself into the “hearts and bones” of audiences all over the world, his name has become synonymous, not only with music, but with cultural history.

In this brand-new show, British singer-songwriter Gary Edward Jones not only recites the music of one of his idols, but also tells the unique story of Paul Simon. After years of comparisons, Gary set out on a journey of discovery and for over two years, he lived and breathed all things Simon, creating a show which has received five-star reviews and standing ovations across the UK and comes to NYC!

See it if You’re a huge Paul Simon fan and would be happy hearing snippets of his music sung by someone else.

Don't see it if You expect any kind of engaging story or wit or details of Paul Simon’s life that a shallow dive on Wikipedia would give you. Read more

See it if A really good singer who sings and gives you some biography about Simon. Older crowd who like Simon.

Don't see it if It can be slow at times with one sad song after another.

See it if Solo singer/guitarist does a revue of Simon songs with biographical comments. Older audience of Paul Simon fans loved it.

Don't see it if I found it soothing but dull. One lonely ballad after another, without much humor, drama or excitement. Hot stuffy theater.

See it if u want to hear a Paul Simon devotee adeptly cover a handful of Simon & Garfunkel & solo Simon songs in a graceful yet unexceptional concert.

Don't see it if you expect any true insight or analysis of the revered singer's relationship with Art or the art of songwriting. Read more

See it if You like Paul Simon music, with good singing and music.

Don't see it if Dislike Paul Simon musics, or looking for a biography or action.

Don't see it if A man and his guitar standing very still for his near Kodachrome flash moment. Read more

Don't see it if You are looking for something original. If you are expecting to learn something new about Paul Simon you will be disappointed Read more