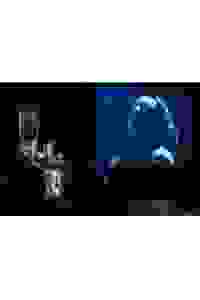 HERE presents this world premiere theater and film hybrid from Rob Roth who performs alongside his on-film counterpart, actor Rebecca Hall. An audio and visual poem that meditates on the concept of the artistic muse.

Through a queer lens, the piece focuses on alternative realities blending and dissolving in a metaphysical and alchemic journey where sound, time, gender, and fantasy transform. It uses original text, songs, and the language of cinema to create a voyeuristic theatrical experience, inviting the audience to observe the private world of two characters that possibly exist in each other’s imagination.

See it if you want to be immersed in the interaction of the technically superior muse and the searching character who is well played by the actor.

Don't see it if multi-media, including a roving camera and projection crew, sometimes with loud television static, and live:screen interaction are not 4 you

See it if you enjoy the experimental work. An enormous effort has gone into creating the multimedia effects.

Don't see it if you want to see a play. There is a suggestion of characters & plot but mostly you will have to create interpretations of what you are seeing

See it if You want to see a really neat set and staging.

Don't see it if You get immediately tired when you go into a dark room and someone sings weird music.

See it if You like watching old versions of film noir. The clips were interesting as was his interaction with them.

Don't see it if The subject matter of dark femme fatale stuff does not interest you. Also drug abuse on screen, and fake cigarettes are very present here.

Don't see it if You want to be entertained

Don't see it if you hope to glean coherent narrative or structure--you have to go with the flow of imagery, which is sometimes clever, sometimes cliche Read more

Don't see it if you dislike multi-media heavy pieces or require an over-arching "message" to latch on to. Read more

“This beautifully designed, maddeningly aimless show...demonstrates how difficult it is to theatricalize a mindscape...The biggest coup...is Hall’s magnetic presence...The text is verbose and vague, and so comically overheated that it can feel like a parody of Tennessee Williams...What’s most frustrating is that...'Soundstage' dispenses enough tantalizing nuggets to make you wish a dramaturge had helped harness Roth’s imagination...Ultimately, there is no emotional payoff."
Read more

“A lusciously designed, 60-minute queer exorcism...Roth’s construct, while technically impressive with its crisp, expertly framed cinematography and intricately choreographed audio-visuals, does not really push the human conversation forward. Instead, it’s a heavily mediated backward glance that might be meaningful to the creator, but feels dated and vaguely unnecessary. When technology is the freshest thing onstage, there may be a problem.”
Read more

"The technical composition is flawless...Roth gives a seamless performance...The entire piece feels like a kind of dance...Some beats teeter between vulnerable and self-indulgent. There’s a great deal to take in and it can be challenging to know where one’s attention ought to fall...However, once one lets go and allows themselves to sink into the haunting, out-of-time world...’Soundstage’ is a singular experience for audiences that enjoy something off the beaten path.”
Read more

"A compelling stream of consciousness that flows along with the sound waves and vintage film footage. With stunning technicality and poetic sensitivity, the show paints and composes the complex emotions when we are left alone, discarded and exiled into our most profound addictions and desires...It is rare to see such high-quality execution of all the technical characters including...synchronization between live actor and pre-recorded footage."
Read more