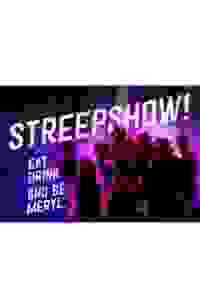 This is the tale of nine characters once played by Meryl Streep, picked to live in a house and have their lives taped. The characters in 'STREEPSHOW!' have no knowledge of the actress Meryl Streep and think of themselves as real people with tragic biographies. But when the winner of 'STREEPSHOW!' is promised the opportunity to rewrite her sad story, it's every Streep for her exquisitely poised self. This is theater in reality TV drag, actors in Meryl drag, and America's pop-music canon in cabaret drag. There are four episodes in all, presented in two separate performances (installments 1 and 2, and 3 and 4).

See it if you're interested in really smart, scrappy downtown theater that has both popular appeal and experimental flair.

Don't see it if you have no interest in Meryl Streep. A lot of what makes this show work is the remarkable way these performers are able to capture her.

See it if You love Meryl and want to see all of her characters locked in a house together vying to win via a reality tv comedy setting.

Don't see it if You want a serious production. It's a very off Broadway production.

See it if You have a friend in the cast. You like when an actor throws up on the front row. Literally.

Don't see it if You want to hate Meryl Streep for the rest of your life.

See it if If you love campy shows. You must love Meryl Steep and have seen many of her movies in order to appreciate this show. The writing is clever.

Don't see it if You are not into drag or spoofs of reality TV. Or, if you are not a Meryl Streep fan, this show is not for you.

See it if you LOVE Meryl Streep. This show wouldn't be as good if you don't understand the references.

Don't see it if you need high production value, you don't wan't to see some mediocre performances.

See it if You enjoy kitschy, campy humor. Funny , Indie theatre on a shoestring budget.

Don't see it if You don't find men (and women) in Meryl Streep drag funny. It's not - It's Hysterical! You don't like reality tv shows or Meryl Streep. Read more

See it if you enjoy campy theatre and want some light , easy entertainment.

“Built on a concept that could have made for an ace sketch but instead takes up nearly five derrière-numbing hours…The evening starts off promisingly, if a bit shambolically…A lot of time is taken up by in-jokes about the movies. Songs spoofing well-known tunes eat more precious minutes…This might make Andrew Neisler’s production, for the Tank, sound like a fun evening in the East Village, which is when I need to remind you that...it goes on for hours."
Read more