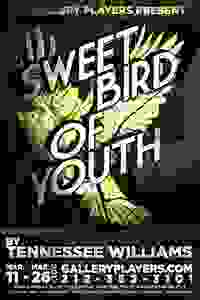 Gallery Players presents Tennessee Williams' 1959 drama about a drifter who returns home with a former film star on his arm.

'Sweet Bird of Youth' tells the story of Chance Wayne, a failed actor and a gigolo who returns to his hometown as the companion of a faded movie star, Alexandra Del Lago. Chance hoped to reunite with the girlfriend of his youth and bring her out to Hollywood, but he quickly discovers that his plan won't be easy.

See it if you want to see a Tenn. Williams work performed by some up and coming young (mostly) talent. The Gallery has come "thru" with a winner

Don't see it if you have given up on 3 hour productions. and Brooklyn is too far. Sets are great too (NO BAD SEATS) ..

"The Gallery Players' rendition of 'Sweet Bird of Youth' is all the beautiful raw tragedy at the heart of Tennessee Williams' works, which is perhaps the greatest gift an audience can get. Under the flawless direction of Jesse Marchese, these actors deliver...All of the actors are excellent vocally under dialect coach Joe Hetterly. They smoothly deliver different Southern accents while never becoming a joke...The fight choreography is also seamless without looking staged."
Read more

“‘Sweet Bird Of Youth’ was the last critically acclaimed play by Tennessee Williams before drugs and alcohol destroyed his productivity. It is an entertaining spectacle showcasing his skill delivering a masterclass in dialogue and story development. The actors perform their parts with emotion and passion. This production is funny, moving, and at times, unpredictable. It keeps the full attention of the audience through three acts. A standing ovation for a job well done!”
Read more