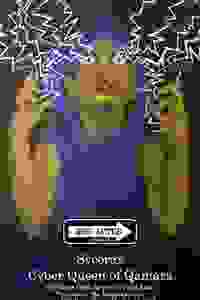 In Ego Actus's new drama, Sycorax, the sorceress who was reported dead by Prospero in Shakespeare's "The Tempest," is still alive, having waited five hundred years for the ideal technology to reveal her story.

Sycorax has been lying in wait for the right medium to tell her side of the story. The internet is what she was waiting for. The first half of the play is her backstory in wealthy households in Algiers where her family wants to marry her off to a man she does not like and she discovers her supernatural powers. She gets banished to the jungle island of Qamara and plots her revenge.

See it if you want to see a clever presentation, bringing forth a 500 year-old character to set the record straight: costumes, direction, staging ****

Don't see it if you cannot open your mind to the possibility of this story told by a fictional character in a modern way.

See it if you’d like to see an offstage character from Shakespeare’s “The Tempest” given free rein in a smart, handsomely produced play of her own.

Don't see it if plays that freely mix the narrative with the dramatic or the fairy tale with the contemporary bug you. Read more

See it if The Tempest 2 w/ metred rhyme. Flouting the constrictive Koran, an Algerian witch justifies her developing powers because all men betray.

Don't see it if Underlying assertion that all males betray and disappoint, especially mates & sons. A woman with special feminist power might threaten.

See it if you want to see a really good feminist show with warnings about the corrupting power of power and title.

Don't see it if you are a misogynist or believe that people earn respect through title of position. Read more

See it if You love The Tempest and would like to see a retelling/sequel to it. You like plays with strong feminist themes You're into cardboard beards

Don't see it if You need subtlety - the themes in it were very in your face. It's not a completely finished work; I'm glad I saw it, but it's not polished.

See it if you're familiar with "The Tempest" & can appreciate the back-story of Sycorax, the witch; you like feminist fables; you like indie theatre

Don't see it if you want a big budget show; broad themes of female oppression irk you; if you need more nuanced themes; you like Shakespeare served straight Read more

See it if you enjoy seeing a feminist viewpoint of a Shakespeare play. Excellent writing from the wonderful Fengar Gael. Production should be better.

Don't see it if you are not interested in feminist theater or need high production values.

See it if you want to see a take off on a classic play with modern day technological twists.

Don't see it if you object to one of the great works recast with a modern theme.

"Ms. Bargman is so hilarious, sly, and overly dramatic though achieving a fully realized characterization that one wishes this was a solo show showcasing her commanding talents. Unfortunately, it’s a problematic play given an ineffective production...Director Joan Kane isn’t able to successfully translate Gael’s fanciful and ambitious scenario to the stage. The off-kilter gee whiz tone is more appropriate for a children’s theater matinee rather than a sensual epic."
Read more

“In this top-notch feminist piece, the witch from 'The Tempest' uses much magic and internet technology to tell her story...Kane has helped develop and stage a novel and relevant play that shows a woman, at the height of her powers, seeking to be herself, worship as she wishes, and simply live without being called a witch. If you want to see a play that gives voice to a maligned female literary character, this is your chance.”
Read more

“This funny, literary, campy comedy is a Wicked-style corrective for a witch with a terrible reputation...The cyber-age spin is amusing but mostly ancillary to the heart of the story...It beats to life through Kane’s taut direction and the gaudily theatrical performances she draws from a fine cast centering on a blazing performance by Capkanis as Young Sycorax...My feelings about the ending remain unresolved, but I strongly recommend this captivating production.”
Read more

“The unvarnished criticism of gender roles in the earlier part of the play, evolves into something thornier by the end, but its cheeky sense of humor is constant, and it combines that sense of playfulness with an almost storybook aesthetic and feel...’Sycorax’ and its long-lived protagonist take on issues from patriarchal oppression to self-aware AIs and still leave room for some laughs...For anyone who has ever wanted to know more about Shakespeare’s mysterious ‘blue-eyed hag’."
Read more