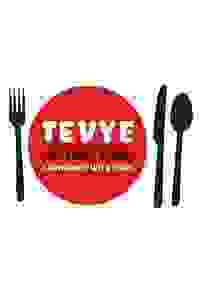 An evening of stories by renowned Jewish writer Sholem Aleichem, the creator of the Tevye stories which became the basis of 'Fiddler on the Roof.'

'Tevye Served Raw' features a mix of purely comic non-Tevye stories and comic and dramatic Tevye stories. It goes back to Sholem Aleichem's original, and it shows you what they left out of 'Fiddler,' going much deeper into what life in the shtetl - where most American Jews' ancestors come from - was really like. Plus you find out what happened to the characters after the plot of the musical ends.

Performed in English and Yiddish, with English supertitles.

See it if you speak Yiddish. You'll be delighted to hear the actors speaking the colorful language with ease.

Don't see it if you want to learn about SA or to enjoy his stories. I love his writing, but didn't find their charm/humor here. Subtitles awkwardly placed. Read more

See it if You love Tevye, Alecheim, or Yiddish Theater.

Don't see it if You don’t want to read supertitles. About half the stories use them. Read more

See it if you want to see/hear the stories about the 'real' Tevye by the person who wrote the original..

Don't see it if you don't want to struggle with super-titles. you are not into Jewish stories and Jewish humor.

See it if you want a different look at the creative genius behind Fiddler on the Roof, love Yiddish theatre or just want to be entertained!

Don't see it if You hate Yiddish, are bored by Fiddler and want splashy sets and costumes and can't read subtitles.

See it if you want some background to Fiddler and it's original writer Sholom Aleichem; you like Jewish/Yiddish culture.

Don't see it if You're expecting a full length scripted story; you don't like stripped down productions. Read more

See it if If you’re a fan of Yiddish shows, this is a must-see. See it if you want to learn more about other Shalom Aleichem works, esp Tevye stories.

Don't see it if If you want a fully-staged elaborate production, with a large cast. Or if you don’t enjoy hearing the Yiddish language.

See it if The actors were terrific! A deeply moving reminder of what shtetl life was like in Eastern Europe. I laughed and cried!

Don't see it if The only reason not to see this wonderful production would be dislike for supertitles.

See it if You know about Yiddish culture and love Yiddish humor.

Don't see it if You hate fast paced silly fun

"The essential sweetness-cum-pathos of Aleichem’s life and his genius...This Tevye is a small work that elicits chuckles, not guffaws; sniffs, not sobs. The actors work hard and even brings the audience into the act...It’s delightful to see the Tevye characters interpreted from the inside out with minimal costumes...It celebrates what makes us interconnected humans with the attendant joys and sorrows...The show is an appealing combination of sadness and humor."
Read more

"Take one black-box theater, three superb actors, and material that is, in turn, funny, poignant, nostalgic, and powerful, and the result is magic...In the hands of Yelena Shmulenson and Allen Lewis Rickman, and Shane Baker, the material presented has the ring of authenticity...Ms. Shmulenson and Messrs. Rickman and Baker are clearly proficient in Yiddish, but those who don’t speak Mama Loshen have nothing to fear."
Read more

"The majority of the show is funny and plays around with exaggerated Jewish stereotypes...The actors articulated the historic language with what seemed like professional ease...I don’t think you have to be Jewish or even Jewishly inclined to enjoy what this touching and hilarious show has to offer. 'Tevye' has something for everyone, Jewish, Yiddish-speaking or none of the above. Beyond tradition, as a celebration of the things that make us human, 'Tevye' succeeds."
Read more

"When Jews weren’t weeping and lamenting, they laughed about their recognition of truth...Sholem Aleichem recorded their doings in the tricky Yiddish outsider/underdog vernacular, difficult-to-impossible to translate into warm and amusing English. Yet this task was accomplished...Try to see it. This amazing trio, Baker, Rickman and Shmulenson are doing something very honest and special. They deserve everyone’s support."
Read more

"For most of us Sholom Aleichem calls to mind the lovable characters of the musical, 'Fiddler on the Roof': Tevye, the milkman, his wife Golde and their three daughters. But, in fact, the Yiddish writer was much more...On a bare stage, these actors bring their characters to life, with little to aid them but their own talent...Seeing 'Tevye Served Raw' brings us back to the real Tevye, the one Sholem Aleichem created before nostalgia and security softened his edges."
Read more

"There are few New York actors more capable of bringing true Yiddishkeit to the performance of Yiddish theatre than Allen Lewis Rickman…Tevye doesn't sing, but the role's dramatic power comes across in three…selections…The other selections…provide insightful satirical sketches depicting late 19th-century Russian Jews...Baker and Rickman's translations are ripe and colloquial…Several selections tend to go on too long, but fizzle for lack of sufficiently strong payoffs."
Read more

“Three talented people acting in Yiddish are providing an entertaining delve into stories by the celebrated Yiddish writer Aleichem...A combination of the humorous and the serious in the chosen stories...The cast is extremely versatile...Performances come across as a salute to the preservation of Yiddish, as well as further evidence of how creative Sholem Aleichem was in capturing a way of life with its pleasures and perils.”
Read more

“A sweet and savory side dish to accompany the National Yiddish Theater Folksbiene’s rousing adaptation of ‘Fiddler’ in Yiddish...There’s a riotously funny encore...It’s all a great deal of fun...It’s all a great deal of fun, with the Belarus-born, Ukraine-raised Shmulenson standing out among the three, portraying a wide range of female characters with zest and flair. Baker and Rickman make a fine comic duo with vaudevillian instincts. 'Tevye Served Raw' is a tasty little treat."
Read more

“A lively new production...Rickman’s touching portrayal of Tevye is only one highlight of many in this high-spirited variety show of sorts, which features tasty comedy and searing drama...The creators of the show strive to tell the stories we didn’t learn in ‘Fiddler’ with all the poverty and anti-Semitism intact...The actors’ commitment to their roles and their collective energy truly transcend language. You’ll laugh. You’ll cry. And you’ll be guaranteed to expand your repertoire of Yiddish insults.”
Read more

“We get splendid stories, superbly acted by all three cast members...We get a tear in the eye, belly laughs, character galore. Not to mention: here, we get Yiddish...Captioning and translation make it possible for those of us who don’t know a schlemiel from a schlemazel to understand everything...The actors are so good...Rickman in particular shines in this show, although it’s hard to assess one performance as better than another....It’s delightful.”
Read more

“This funny and poignant show depends entirely on the exceptional talents of the three performers — Shane Baker, Yelena Shmulenson, and Allen Lewis Rickman — who bring real acting chops as well as a superb command of the language to this work...Rickman intersperses funnier material between the Tevye stories so we come away with a fuller sense of Sholem Aleichem’s work, which could be dark as well as humorous.”
Read more

“Based on the stories of the incomparable Sholem Aleichem...At times, rollickingly hilarious, at times almost heartbreakingly sad...'Tevye Served Raw' is far from a museum piece. The acting is always spirited, the script and innovated direction are clever...Crafted with love for Yiddish traditions. It not only entertains, but may also motivate you to learn Yiddish...The comedy is enhanced by the acting – which is filled with comic excess and surprise choices. The staging is inspired.”
Read more

“The play is comprised of vignettes of both funny and tragic stories taking place in Tevye’s family and city...The actors excel not only in comedic expression, but also in layered performances...Vivid, memorable characters...One of the greatest strengths of the play is the animated gestures during Yiddish conversations...This lends the piece with a humor that is both Jewish and relatable to general audiences...Fun evening that provides a bit of depth and history.”
Read more

“The production, brilliantly directed...includes a near-even mix of hilarious moments and tear-jerkers...Rickman and Baker’s translation captures the many-layered richness of Sholem Aleichem’s original...The three actors have fantastic comedic chops...’Tevye Served Raw’ truly excels in its tragic scenes...A small miracle that Sholem Aleichem’s works have found three actors who can stage them in a way that speaks to a contemporary audience without being...nostalgic, corny or overwrought.”
Read more