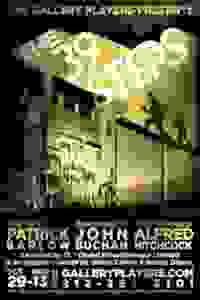 Richard Hannay lives a boring life. Then he meets a mysterious woman with a thick accent who claims to be a spy. When he takes her home, she is murdered. Soon, a mysterious organization called 'The 39 Steps' is hot on his trail. Hannay must race to solve the mystery while trying to clear his name. An outrageous comedic adventure featuring an onstage plane crash, handcuffs, missing fingers, and some good old-fashioned romance.

See it if just...don't. The few times we chuckled was unfortunately at their expense. Trekking to Brooklyn for dinner was great but not for THIS mess.

Don't see it if you're expecting hilarity. Spanky & the Our Gang kids put on better shows out back in the barn. We groaned & rolled our eyes for 2 long hrs.

See it if Great silly fun!If you dislike

Don't see it if if you dislike joyous fast paced romps

See it if you like campy but a funny spoof on Hitchcock.

Don't see it if you are a purist.

Don't see it if hate Hitchcock or don't like spoofs.

Don't see it if you better hurry. Closes this week.

See it if You are a Hitchcock fan and enjoy the idea of a few actors taking on multiple roles.

Don't see it if You might be lost if you are not a devotee of Hitchcock.

Don't see it if you are easily bored.

See it if you enjoy creative, very funny writing and staging, and strong performances.

Don't see it if you're looking for more than pure entertainment.

"The Gallery Players' 'The 39 Steps' is like really entertaining clockwork. The talents of the cast and the production team combine to keep this fast-paced comic whodunit moving without a hitch...Austin as the wrongly-accused Richard is hilarious...Baxter is phenomenal with accents and postures...And the combination of Leyenberger and Walsh is nothing short of legendary."
Read more

"Despite its peregrinations, the play retains much of its small-scale, village hall beginnings in North England. Which is why it does so well in its latest revival, where it is ably directed by Gallagher...Much of its success relies on the synergy this ensemble creates. Happily, the ensemble is energetic, funny and perfectly foolish at all the right times...It is not necessary to get all the allusions to enjoy the show. But a high tolerance if not a love of pratfalls is definitely required."
Read more

“This is a parody of the 1935 film made by Alfred Hitchcock, which was based on the 1915 novel written by John Buchan. This 4-actor version contains 33 scenes. All the actors are extremely talented but the play may not be everyone's cup of tea. There are times when the plot is absolutely ridiculous and others scenes that are brilliant. If you’ve seen the play and liked it, you will not be disappointed. If you haven't seen it, this is a perfect opportunity to see it for a very reasonable price.”
Read more