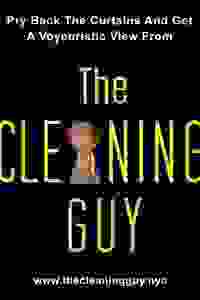 A FringeNYC Encore: Emerging Artists presents the hilarious journey of one man's dealings with the dirty secrets of NYC apartment dwellers.

Written and performed by Paul Adams, this musical solo show is a wild ride that gives audiences a voyeuristic view of what lies behind their doors. Adams spent three years developing the script, which is based on his life as an apartment cleaner in New York City since 1991. In addition to being the "cleaning guy," Paul has also been the Artistic Director for Emerging Artists Theatre since its inception in 1993.

See it if you like funny thought provoking solo shows with singing. I am still considering how we all have life secrets hidden in our homes.

Don't see it if you need a lot of plot. This is a series of vignettes where the characters are acted out as well as being commented on by the performer.

See it if You want a sincere, mostly humorous, memoir told through song. You enjoy hearing personal anecdotes.

Don't see it if You're expecting a show that's 100% comedy-the show takes a dramatic turn. You want a show with big production elements.

"Just as Adams can't help getting emotionally involved in his clients' lives, I too felt gripped by the stories in his one-man show. It's fun watching this polite Midwesterner help tidy up for New Yorkers, all the while giving wonderful impressions of his former clients…It's littered with interesting vignettes of people who struggle with their living spaces...Most poignantly, the sadness of losing clients to disease and death really stands out...Some stories need to be shared on a stage."
Read more

"There is the potential for poignancy here, and moments when Adams almost manages the keen trick of having the audience see themselves in the people he worked for, but the parade of wacky characters tends to march off with the focus. Adams’ stage presence is not quite as glowing as his floors…He sometimes struggled to remember his lines which, if it’s your own life story you’re telling, is especially distracting."
Read more

"Most of his stories are interesting, ranging from comedy to heartfelt drama...Though some slightly miss the mark, it is of no concern, since he writes about what he knows and has experienced in this sometimes bizarre occupation. It is the first thirty or so minutes of the show that sometimes feel repetitious. But then the performance suddenly takes off and starts to fly...It is a well-constructed piece of theater that can only improve with time and tightening the script to an hour."
Read more