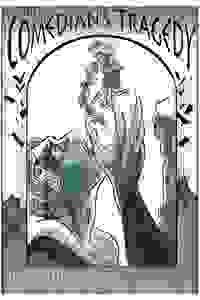 423 BCE. The Gods are hungry. The greatest city of her age, Athens has fallen: wracked with plague, war, drink, lust, gods, demons, and a dark fog of nihilism eating away at her light. Censored and labeled a pervert for standing up to the state, a young Aristophanes passes his nights in a haze of booze and sex, spitting into the face of tomorrow with the courage of the damned. When the unlikeliest of heroes emerges, can a guilty soul become Orpheus and sing life back into the ashes?

See it if Sone good acting and very good direction. Intresting story amongst a theater that was 80 plus degreed.

Don't see it if You need to think with this one. Focus is a must. If you do not like Greek stories.

See it if you'd like an enjoyable off off Broadway production, well written, wonderfully acted and nicely staged with very different wall art/lighting

Don't see it if you are looking for a lavish production, do not like ancient theater, or cannot sit for two long acts in a very warm theater.

See it if Greek playwright fights with rulers & gods, falls in love, and is doomed to live in his own tragedy. Poetic, well acted, cleverly written.

Don't see it if The characters emote a lot but I didn’t feel anything for them. Go if you want to see an impressive intellectual accomplishment. 2.5 hours

See it if Greek mythology is a passion. Interesting interpertaion of the gods, their relationships and amusements.

Don't see it if you haven't reviewed who's who in the pantheon. Its easy to miss motivations and details without the background info

See it if you love ancient Greek culture, theater history, hybrid forms, a theater of ideas or smart new scripts.

Don't see it if metatheatricality, even when it’s “sincere”, leaves you cold, confused, or both. Read more

See it if interested in Greek history, mythology,theater, language driven plays. Amdent, who is also the playwright & Menzel are exceptional.

Don't see it if you don't want to spend 2 1/2 hrs in an uncomfortably warm theater. However, if you stick it out, you will be amply rewarded.

See it if Several engaging actors w/ dazzling speeches: Menzel, D’Ambrose, & Amendt excellent. A gloriously clever riddle at the core of the show.

See it if You're looking for great writing

Don't see it if The classics don't interest you

"Matthew Amendt's The Comedian's Tragedy in the style of meta-theater is an ambitious work which is ultimately a failure: it neither offers a compelling reason for its historic plot nor makes it dramatically believable enough to work as a tragedy. With so many facts left to the viewer's imagination, it really needs program notes or a good deal of explanation not given by the narrator Chorus Leader. The unevenness of Bill McCallum's deficient production makes the two and a half hours seem much longer than they actually are."
Read more