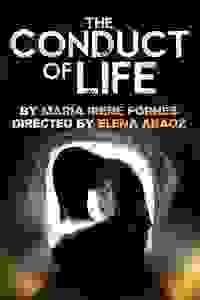 View in admin
The Conduct of Life
NYC: East Village
74
Score it Scored!

The Conduct of Life NYC Reviews and Tickets

The play follows Orlando, an army officer serving under the totalitarian government of an unnamed Latin American state. As he advances in his career, Orlando perpetrates state-sanctioned acts of violence, warping his psyche and gradually upending life in his household. His descent into a lifestyle of corruption and abuse leaves Orlando’s family grappling with the pernicious intrusion of state terror in their private lives. This exploration of power, gender, and greed provides a timely and brutal portrait of domestic life under authoritarianism.

Don't see it if Torture and sexual abuse. Loss of humanity, emotional pain, and extreme anger. Terrified family. Makes its point; you won't forget it.

See it if Very intense story a man that wants power and what he does to get the power.

Don't see it if Deals with torture sexual abuse. You want a happy story with music, singing, dancing. Read more

See it if you enjoy brutal depictions of cruelty and violent behavior which escalates as the production drags it's way to the finish.

Don't see it if you need a more easily understood plot and dislike the depiction of brutality and cruelty on stage; you don't care for minimalist productio

See it if you believe man is inherently evil or stupid

Don't see it if violence depicted onstage is a trigger for you. Read more

See it if you appreciate Fornes' elliptical plays and want to see a spare but solid revival of one her compact, dreamlike plays

Don't see it if you're triggered by stage depictions of violence, psychological or physical; you don't like claustrophobic environments Read more

See it if you must see all of Fornés oeuvre

See it if you don't have especially high expectations because it's by Irene Fornes; good acting can make an otherwise unappealing play worthwhile.

Don't see it if you can't deal with a play in a tiny, almost claustrophobic space that is relentlessly and almost exclusively about violence against women.

"A raucous yet insightful fantasia about military oppression taking its toll on the populace...The play is structured as 19 short, often absurdly funny and sometimes unsettling scenes, some lasting just a few seconds, that total 75 fascinating minutes...Araoz’s vibrant staging perfectly realizes Fornés’ vision...Araoz also crucially guides the vivid performances that are on display...Granados achieves a grand portrayal of a Brechtian everyman."
Read more