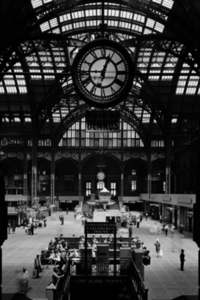 Developed in collaboration with the Architect Institute of America commemorating the demolition of the Old Penn Station, the play charts an unlikely friendship across the upheavals of the mid-1960s.

On October 28th, 1963 the demolition of New York's Pennsylvania Station begins. The wrecking crews work outside in the morning drizzle to dismantle a fifty-three-year-old architectural marvel. Inside, a construction worker turned photographer is running away from his past while an aging English teacher can't let his go. Their coincidental meeting begins a three-year conversation over the value of old and new, as one man fights to keep the station standing while the other is taking it down. 'The Eternal Space' aims to bring the Old Penn Station back to life while giving voice to the quiet lament of losing it half a century ago.

See it if you are interested in the destruction of the original (magnificent) Penn Station. The loss to NYC resulted in other landmarks being saved.

Don't see it if you want a fully-engaging play. The dialogue wasn't all zippy. I zoned out some. The visuals, tho, were impressive (blown-up photos). Read more

Don't see it if you don't like historically relevant stories, slow stories.

See it if You love architecture and/or photography. *I like the parallel of the 2 characters tearing each other down & building each other back up.

Don't see it if You're looking for a history lesson about Old Penn Station. You prefer lighthearted plays with immensely likable characters.

See it if You love a good story- the kind that sticks with you and you want to tell everyone you know all about it.

Don't see it if You want to see a musical.

See it if you love New York. This is a love letter to the city as it was, is, and will be. A timely reminder that nothing lasts forever, and that's ok

Don't see it if You think it's going to be a dry play about architecture or history.

See it if You are are a New Yorker or love New York. It has an amazing set that will transport you back in time to the New York of old.

Don't see it if You expect a over produced musical

"Rivers has conceived a genial, but unexciting, odd-couple comedy that moves along its appointed track with the predictability of the 5:15 train from Hoboken...Clyde Baldo and Matthew Pilieci are true pros, who, under Mindy Cooper's solid direction, make their dialogue seem better than it is. Their encounters are sometimes charming, if not terribly urgent…Clearly a piece written with real love for its subject, 'The Eternal Space' doesn't quite transcend its limitations."
Read more

"'The Eternal Space' is a strangely gripping piece that works on several levels...This beautifully wrought creation features two splendid actors...The excellent direction is by Mindy Cooper. This wonderfully structured play was written by Justin Rivers, who is also the producer...Two nits that need to be picked. A cultured English teacher would hardly use 'enormity' when he meant 'enormousness' . When the actors lower their voices, lines are sometimes lost."
Read more

"Under the fine direction of Mindy Cooper this is essentially a poignant consideration of the station's legacy and its architectural grandeur…Despite this production being small in scale, it is nevertheless grandly empowered. Through the playwright's somewhat conventional plot device, we listen as two men divided by a generation, education, and social strata provide distinctly different perspectives of what Penn Station was in its time, what it represents to them and what it fatefully became."
Read more

"Mindy Cooper provides attentive direction that gives the actors the room they need to develop their characters and tell their stories. The two actors here are somewhat mismatched...Nonetheless, 'The Eternal Space' deserves a visit before it closes on December 6."
Read more

"'The Eternal Space,' though often overly sentimental, successfully delivers an interesting story line that celebrates the mysterious and serendipitous nature of relationships...Mindy Cooper provides attentive direction that gives the actors the room they need to develop their characters and tell their stories. The two actors here are somewhat mismatched, Mr. Pilieci stronger than Mr. Baldo and delivering a more layered performance."
Read more

"What makes 'The Eternal Space' most worth visiting is its striking visual conception. Set designer Jason Sherwood has made highly creative use of the Lion’s tiny stage by creating a forced perspective row of white, arched columns along each side with a central arch upstage, allowing the projection of 1,000 stills—combined with video photography—picturing the gradual dismantling of the massive institution."
Read more

"A touching and warm trip down memory lane, both for the actors in the play as well as an audience old enough to have experienced or perhaps only young enough to have heard about it...Justin Rivers has penned a two-hander that will warm your heart over at the Lion Theater...The show features grand projections that turn the stage into the grand station itself from various angles and times."
Read more

"Each actor turns in a strong performance, convincingly creating the triangle of tension between the two men and the doomed Penn Station. Playwright Justin Rivers has created some incredible dialogue that rings authentic for each character, and director Mindy Cooper has cultivated an appropriately complex, but not overly so, rapport among her actors."
Read more