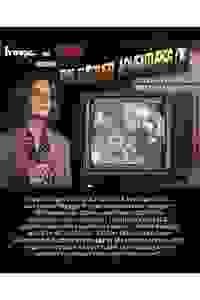 The Further Adventures Of... (FringeNYC)

Part of FringeNYC: Tune in as Maggie Day uncovers the story behind the story of a classic sci-fi series and follows its players from the ‘50s to the age of the internet, revealing secrets, lost loves, and things people couldn’t say then…or now. More…

FROM THE ARTIST:
Tune in again for The Further Adventures Of...
and follow Maggie Day as she uncovers the story
of Commander Zoron and Prince Kal in the
‘50s sci-fi serial: Atlantis, 1 Million Years B.C.,
and the actors who portrayed them — Drake Darling
and Frank Gallagher. Follow their paths from
a classic sci-fi show to the age of the internet, revealing hidden secrets, lost loves, and the things people couldn't say then (and maybe even now?)

See it if You like plays focusing on the writing, directing and acting, about imaginary histories, LGBT life.

Don't see it if You don't like depictions of gay lives/histories onstage.

See it if You want to see a complex view of those b&w shows of your childhood (or older) which includes same-sex enchantment.

See it if You ever had fantasies about your childhood superheroes.

Don't see it if you have no sense of fantasy.

See it if You like classic Hollywood sci-fi stories and want to get swept away to another time...which isn't that far from this time.

Don't see it if You want big sets and special effects. The performers do all of that!

See it if You want to see a well performed show that makes you feel emotions and laugh.

Don't see it if you have no love for first-person narrative storytelling; you lost your soul in a late-night game of Fireball pong; nah. just see it.

See it if You're interested in the history of pop culture, LGBT stories, slash fiction, Old Hollywood, interesting storytelling techniques

See it if brought back great memories of my childhood watching T.V. acting was great.

Don't see it if if you are under 10 years old

See it if You're a writer oryou acted out TV shows with your friends when you were a kid (my show was "The Man from U.N.C.L.E).

Don't see it if You hate LGBT people.

See it if you remember being a child or want to; you like stories about how important stories are; you like excellent acting and a good story.

Don't see it if you don't like LGBT themes, I guess. But you'll be missing out.

See it if you like great writing, have a sense of humor, and don't mind having your heartstrings pulled a bit. Beautiful show.

Don't see it if you need elaborate sets to draw you into a play, or if you are a cold-hearted clod with no humanity. Everyone else should love it.

See it if ... you're a compassionate human being. If you have the capacity to be on a thoughtful journey with a grateful dreamer & laugh along her way

Don't see it if ....you are looking for a no-brainer, lack-luster barrel-of-laughs from beginning to end.

See it if You love an clever and well told story that will pull at your heart a bit and leave you better for seeing. Timeless.

See it if If you enjoy original, intelligent and thoughtful theater.

Don't see it if You have an issue with LGBTQ themes.