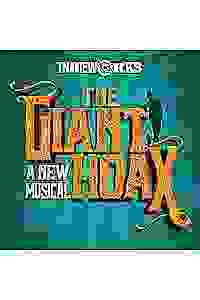 This new, family-friendly musical, based on the true story of New York's famed Cardiff Giant, offers a whimsical  journey to the past by way of a young girl’s imagination.

Step back in time with us to 1869! Emily, a bright young girl with an overactive imagination, has run away from home to prove that there are wonderful things in the world out there! Before long, she finds herself in the employ of a shady showman, William "Stub" Newell, the owner of a prehistoric, petrified giant! She and the Giant become instant “imaginary friends,” but all is not well. When the unscrupulous circus impresario, P.T. Barnum, offers a hefty sum to buy Newell’s profitable, prehistoric attraction and is refused, he comes up with a scheme to steal Stub's business right out from under his nose forcing Emily to sort through what is fact, what is fiction, and what's all in her imagination.

Kit Goldstein Grant’s new musical, based on the true story of New York's famed Cardiff Giant, features a catchy score packed with wonderfully whimsical music and clever lyrics making for a fun, family musical that bursts with excitement – and even a bit of history – as a cast of colorful characters takes you on a journey to the past by way of a young girl’s imagination.

See it if A cute and charming little production. Catchy songs and an interesting story make a nice time at the theater.

Don't see it if You want perfectly polished productions. Can’t see good bones in a show.

See it if Show the whole family can go see that is not just for kids.

Don't see it if looking for adult theme show. This is not for little kids. Read more

66
It’s a children's musical with a large puppet.

See it if You’re looking for kids musicals.

Don't see it if You want a real musical.

See it if The young girl will have a career after this. Really talented kid. The show was best for kids.

Don't see it if This was not fast paced and I just could not get into this show.

See it if you enjoy great singing and clever lyrics

Don't see it if you were not entertained

See it if You like a new musical with heart and soul with a good old fashioned circus style story. Innovative and kind. Lovely songs big puppet.

Don't see it if You don’t like the above. Or circuses or wizard of Oz wonder.

See it if want to see a wonderful world of fantasy, charlatans, what is imagination, and what is real. Even a beautiful puppet Is thrown in.

Don't see it if You are not a curious person and can’t question the events in our own “Alice in Wonderland” political world. Read more

"'The Giant Hoax' is a charming morality tale about telling the truth and growing up. The expert hands of director Christopher Michaels and choreographer Molly Model are clearly at work in all aspects of this production, bringing a touching story with affable songs and clever lyrics to life with a cast of first rate actors."
Read more

"Step right up and learn about a fun piece of New York history…marking the 150th anniversary of 'the biggest hoax in history'…the business of catering to gullible chumps is alive and thriving."
Read more