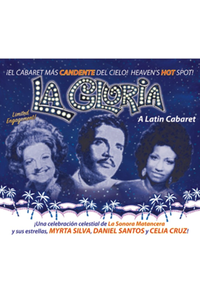 This musical celebrates La Sonora Matancera and its late legendary members: Myrta Silva, Daniel Santos, and Celia Cruz. Silva and Santos are the stars of a nightclub in Heaven hosted by the Archangel Camacho. One night, Celia Cruz arrives and wants to share the stage with them. It turns into a memorable evening as they sing their greatest hits. 'La Gloria' combines a live orchestra, singers, puppets, and a little celestial magic. Performed in English with songs in Spanish.

See it if you're Latino and/or love the Buena Vista Social Club-era of Latin music & performers; well-performed in a somewhat silly narrative setup.

Don't see it if you're expecting a straight concert or cabaret, don't like puppets or things bilingual; no Spanish ok, but you'll miss much humor & flavor. Read more

See it if You like Latin music. You like great staging, costumes, singing and dancing. You want to smile, lalugh and be entertained.

See it if nostalgic for pre-Castro Havana or Old San Juan, enjoy Latin music regardless of performance quality and understand Spanish or don't care

Don't see it if your are offended by Hispanic stereotypes, dislike primarily Cuban music or prefer interesting plots in English or subtitles (none here)

Don't see it if You failed High School Spanish. A modicum is required for a full appreciation.

See it if You want to hear music from three great singers (Myrta, Daniel & Celia) of days gone by fantastic singers in a mythical cabaret club.

See it if you enjoy Latin American popular music from the 1950s.Showcasing three veteran singers of the glory days;Silva, Santos, and Celia Cruz.

Don't see it if you prefer something more dramatic or intense. Read more

See it if you like Latin music, dancing, puppetry, and rather cheesy/family friendly musicals. Helpful if you know Spanish, but you can get by without

Don't see it if you don't like Latin music, dancing, or puppetry.

"Sequins abound, as one might expect from any self-respecting Latin Cabaret. There are only so many situations in which it’s hard to have too much sparkle, and 'La Gloria' takes full advantage of being one of those situations, with costume and set design (also by Calero). A nightclub in the clouds is silver, blue, feathered, ruffles, white tuxedos and sparkle...This bilingual production is jubilant, and no less so for an English-speaking audience.”
Read more