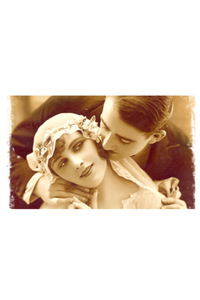 National Yiddish Theatre Folksbiene presents one of the most popular operettas of the Roaring Twenties about a beautiful young woman named Goldele. Presented in Yiddish with English and Russian supertitles.

Goldele was abandoned by her parents and raised by local innkeepers somewhere in the Russian Empire. After the town hears that the young lady has inherited her father’s fortune, she draws the attention of many would-be suitors. Goldele eventually finds her way to America, bringing various characters from her European shtetl with her, and sets about to find the man she will marry. After a successful run in 2015, Folksbiene brings back its revival for an encore run.

See it if Wonderful old fashioned 90yo revival. Great music/talent. Well staged/choreographed. Innocent not trying to be clever. Refreshing. Cudos!

Don't see it if The subtitle should easily have been a foot lower and that would've made it easier on the eyes.

See it if You like romantic old fashioned musicals or operetta. The talent is excellent.

Don't see it if You aren't in the mood to read subtitles as the show is performed in Yiddish.

See it if you want the rare opportunity to see a faithful revival of a classic Yiddish musical, in its original language & w/high production values.

Don't see it if you really object to supertitles. Otherwise, this is a truly enchanting & enjoyable experience.

See it if you like beautiful voices and old fashioned musicals; you'd like to look through a window into a not so distant theatrical era

Don't see it if you would be uncomfortable reading subtitles while watching a foreign language play.

See it if you you want to remember melodies that will stick in your head! Great cast! Great dancing! One of the best shows around. Don't miss it!!

Don't see it if you don't want to be bothered reading supertitles.

See it if You enjoy Yiddish theatre. Want to hear beautiful operatic voices. Like Yiddish humor.

Don't see it if You can't deal with English sub-titles placed high above the stage action so if you are looking at the words you miss some of the acting !

See it if You don't have to be Jewish! The score and the staging are heavenly. Cameron Johnson, the lead baritone, is excellent and adorable

Don't see it if A trip back to the Yiddish theater in NY a century ago, Not just a period piece -- entertaining musical theater. Cameron Johnson is a star!

Don't see it if you expect realistic characters and situations and don't like reading surtitles.

"A summer treat to please audiences who love light theatrical nostalgia presented sincerely and sumptuously...This schmaltz is just an excuse for wonderful comedic shtick and lovely lilting songs performed spectacularly in Yiddish by a 20-member cast...To hear these numbers given the full-blown treatment they deserve is thrilling, with the leads delivering uniformly powerful vocals...No wonder audiences are eating up this effervescent entertainment like Eastern European comfort food."
Read more

"This re-revival is even more splendid and joyful than the one I saw first...One great joy of this production is the exuberant 14-piece orchestra under the jubilant baton of Zalmen Mlotek, filling the theater with endless melodies that has 2016 audiences dancing in their seats. Equally enthralling were the glorious operatically trained voices of the lovers...'The Golden Bride' will give you a golden evening. I can’t imagine who wouldn’t enjoy this joy-filled production."
Read more

"Under the insightful tutelage of Bryna Wasserman and Motl Didner the company performs with just the right degree of excess energy to establish the stylized, dated nature of the material without ever lapsing into parody. The pacing and enthusiasm never lag; despite the obvious theatrics, we become fully engaged with the situations, recognizing both their outlandishness and their essential truth. Corny as it is, the ending will probably defeat your efforts to hold back the eye-faucets."
Read more

"With a luscious, eclectic score and a deliriously frivolous libretto, it provides a time capsule of the popular Yiddish musical entertainment of its day...A lavish production with 20 actors, an orchestra of 14, attractive sets, colorful costumes, evocative choreography and skillful direction that does not condescend to the material...Forget the plot and just relax and enjoy the great singing, dancing and comedy...The uniformly talented cast is blessed with some outstanding voices "
Read more

"The story itself, corny but charming, can easily be followed through the bursts of song and expressive performances by an excellent cast...Plot is not the operetta-style show’s strong point. The fun injected into the rollicking numbers and the romantic ballads drive the production, which is also spiced with comedy and a few broad performances...A boon to those who prize keeping Yiddish culture and the Yiddish language alive."
Read more

"An enchanting production...A pitch-perfect 20-member cast performs the beautiful score, played by an excellent 14-piece orchestra...What’s so touching is how the production bridges the chasm, fusing Jewish music and American rhythms with themes that underscored the conflicts immigrants faced. ‘The Golden Bride’ is a time capsule, culturally and politically...This energetic musical is charming and poignant. The setting is Jewish, but the story speaks to everyone.”
Read more

“For the sound of Yiddish language alone this musical would be worth seeing and hearing as it is, unfortunately, a rare cultural experience...The cast of 20 with their strong voices and orchestra of 14 bring up a hurricane of sounds so sweet and rich, they grab you immediately. The lightness of the music and the subject matter is combined with operatic arias, which give the genre of operetta its distinct style.”
Read more

"Brought back by popular demand. And 'popular demand' is exactly the right phrase. Though often artful, Rumshinsky's operetta has no high-art ambitions and shouldn't be misconstrued as having any...The plot resolutions of such shows were intended to provide nakhes (joy), not surprise...While 'The Golden Bride' is up on its fast-stepping, endearingly feckless feet, you can still get a little taste of the delight that must have filled Kessler's Second Avenue Theater back in 1923."
Read more