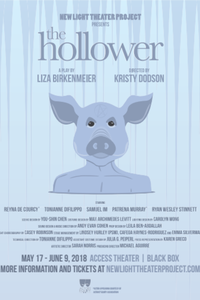 The Hollower NYC Reviews and Tickets

The New Light Theater Project presents Liza Birkenmeier’s new play, which tackles the perils of having a body in a repressed, imperialist, and moralistic world.

Otto is visited by an investigative podcaster who is half-pig, half-man. She also has a teenaged occult enthusiast houseguest who is making a claymation film about seventeenth century witchcraft in her kitchen. 'The Hollower' is a modern haunt-comedy exploring seventeenth century colonialism and how crowded isolation can be.

Don't see it if It's rough going....brief staccato scene fragments coalesce around the bonding of a depressed love-sick lesbian & neurotic high school girl

See it if You like zany comedies & "downtown" theater (man who squeals like a pig, young girl in funky pink hot heels, fun group song from 1950s).

Don't see it if You prefer classical theater instead like Shakespeare

“Aggressively quirky...A hermetically sealed experiment in extreme absurdism. It’s as if Wilkin was expressing the anticipated objections of critics wedded to oppressive Cartesian reason, and Birkenmeier chose to defy her own character and double down...What’s most frustrating is that this young playwright can write strangely appealing segments ― not quite long enough to qualify as scenes, but fuller than mere exchanges. Some of her dialogue often pings with a darkly surreal humor."
Read more

“The dialogue contains a lot of contemporary academic jargon and it all could be interpreted as some sort of Millennial exploration...Birkenmeier offers a tedious, vague and pointless surrealistic escapade...Strains to be funny and significant and tiresomely fails at both...Besides the fine performances, Dodson achieves momentum and visual interest with her proficient staging...Apart from burnishing Birkenmeier’s resumé, ‘the hollower’ doesn’t really accomplish much else.”
Read more

"There is something absolutely captivating about 'the hollower'...I was also enthralled by Kristy Dodson’s directorial choices. Her ambition is boundless and she pulls off some magical moments of stagecraft, rarely seen in Off Off Broadway. She resists pushing the absurdism of the piece too far...The characters and their performances make 'the hollower' something special. Though it does suffer from a few too many ideas and unresolved questions, it is innovative and touching."
Read more

"Birkenmeier exploits Bit's eccentricity for all it's worth…The scenes dealing with Bit and Otto are relatively straightforward…Where the play…goes really off the rails is in depicting Otto's inner world...'The Hollower' is reminiscent in its exaggerated mix of the comically real and unreal of Charles Ludlam's Ridiculous Theatrical Company. It has a few good moments but is never funny enough, clever enough, or even touching enough to make us laugh…or care."
Read more

"Liza Birkenmeier’s 'The Hollower' is the kind of play that tries to push the envelope in a variety of ways but ends up as effective as a pile of shredded paper...In the absence of coherent plot, the designers do some heavy lifting...One can’t really judge performances in such a goulash, and director Kristy Dodson hasn’t given it coherent shape, but Im benefits from his character’s semblance of normalcy and a dry delivery."
Read more

"I know that the cast is excellent. And, yes, I know that the writing is often wonderful. But I can't figure out what the damn thing is about, and that's even after reading the script...'the hollower' is odd and fascinating and I'm glad I saw it. But I also ended up dissatisfied. I needed one little tiny hint as to what I was watching...I do recommend 'the hollower.' If nothing else, I can assure you it is unique. Oh, and thought-provoking. And maybe even funny."
Read more