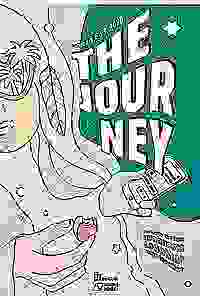 Nick Landers wants to marry Luna Lieberman. But first he has to earn her father’s blessing by joining the family on a journey—the kind you take without leaving the living room. More…

The only problem is Nick has never done drugs before—or “medicine,” according to Shanti, the family’s therapist/shaman. She and her partner Brad are serving Peruvian ayahuasca in heart-shaped chocolates at the Liebermans’ Malibu home this Sabbath, just in time for a surprise visit from Grandma Stern. And you’re invited on the journey.

Along the way you’ll meet a pet psychologist, an up-and-coming pop singer, a rookie cop with a blushing problem, a retired Elvis impersonator and mafia money runner, and a dog named Tom Petty who’s possessed by the ghost of Tom Petty. You’ll watch generations clash, worldviews collide, stars explode into trippy supernovae. You’ll grasp for an instant the infinite mind of God.

See it if you enjoy weird: well-acted dog who is part narrator/talking friend to those on the "medicine," visit by parents hung up on circumcision.

Don't see it if you want to take something home from what you have seen. While mildly entertaining, I didn't laugh much at this "psychedelic comedy."

See it if you enjoy the California "spiritual" scene, you can relate to a talking dog, you enjoy family interactions, your sense of humor is loose

Don't see it if drug use offends you

See it if You know how to make something out of nothing. You have an extremely vivid imagination or you’re high.

Also This starts promising - a newbie is about to marry into a drug-loving family. Oh, the possibilities! But instead of focusing on the theme from different angles, this turns into a meetup of underdeveloped characters (the daughters), cringy cliches (the grandmother and her plus one) and conveniently-appearing late-arriving characters. This play supports 14 roles -- seemingly to avoid development. Instead of focused depth, there are many flat relationships - the play version of fridge magnets.

There are a few charming moments - recreating the under-the-influence feel and some audience interactions, and the man/dog was a good start towards creating a deeper surrealistic sense; but these did not dominate the experience, and as this dragged on I just wanted the trip to end.

See it if you like plays with a large cast

Don't see it if you dont like plays about drug use

See it if You enjoy a large cast on a very small stage who goes through an evening of family drug abuse in order to find clarity.

Don't see it if You wouldn’t be fond of a show glorifying drug abuse in a family setting.

Also The cast was way too large for such a small stage and not all characters were necessary, particularly the officer and I didn’t find the talking dog amusing. The play was disappointing in that it didn’t nearly garner as much laughter as I was open to receiving. I also personally don’t agree that drug abuse should be glorified.... Read more Read less

See it if You are interested in a non traditional exploration of family and boundaries.

See it if You want to see a fun comedy and watch a fantastic ensemble cast with excellent comedic chops have a great time.

Don't see it if you're looking for something heavier than what's in the show description.

See it if you're into tiny no budget productions, silly jokes and bad acting

Don't see it if Just don't. It was excrutiatingly painful to sit through that show, so offensive it was to all senses, mostly to a common one.

See it if You like plays about the '60s '70s free for all hallucinogenic drug days where the whole family gets involved together.

Don't see it if You want a clearer more defined plot.

Don't see it if ...That never really focuses or quite gets off the ground.

See it if If you like small intimate funny plays.

Don't see it if If you are expecting a big production.

See it if You like intimate, well acted, experimental, low budget shows.

Don't see it if You're expecting a big broadway-like production or if you're offended by drug use.

Also I really enjoyed the Journey. The cast was large, leaving little time to develop the characters, but the acting was fantastic and they managed to work well together to tell this out of the ordinary, California hippy-esque story. There were some really funny as well as touching moments and was well worth the $20 ticket price. The only negative was that the theatre was really hot and the air conditioning wasn't working so dress accordingly.... Read more Read less

See it if You’re interested in a play incorporating family drama, therapeutic medicine, some trippiness, Jewish references, and a man dressed as a dog

Don't see it if You’re looking for something with a lot of audience interaction or music. It’s more of a straightforward family drama play.

Also I had thought that this might be somewhat like a variety show with some surreal skits and a few musical acts (Elvis, Tom Petty). However, there weren’t musical acts. There were a few trippy scenes and a talking dog character but, overall, the show unfolded in a fairly linear and traditional play fashion (with lots of dialogue).

The performance was intimate with some attempts at interaction but I really did not find it very interactive.

There are several characters, but I think that the play would have worked better if it was a bit tighter and had more focus. I did not feel that I was on a journey but more like I was hearing pieces of different conflicts (conflicts that wrap up a little too neatly at the end).

It felt a bit rough and there are some strange elements like the man as a dog which, although I understood the role he was supposed to play, came across as weird and did not really work for me.

Overall, I think some of the themes are interesting but it still needs work.

“The Journey” hasn't been reviewed by any Critics (yet!)