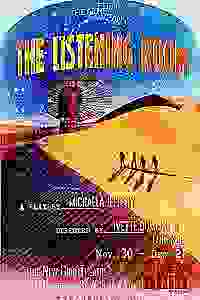 In Nylon Fusion Theatre Company's New York premiere, on the fringes of a remote desert society, a group of teenage dissidents search for fragments of earlier civilizations.

At the heart of a forgotten society calling itself The Earie, young dissidents use radio telescopes to salvage fragments of earlier civilizations still ricocheting between stars. These 'Listeners' fight against growing pressure from the governing central Council, whose hold over the imaginations of the population of The Earie has all but buried the practice of 'Listening.' As the tone of their world tilts away from discourse and curiosity toward emotional rhetoric and fear-fueled isolationism, the last remaining Listeners strike out wildly against the new reality.

See it if you like to see each & every play from the burgeoning sub-genre of dystopian post-apocalyptic futures.

Don't see it if you like plays to be clear & dramatic. Read more

Don't see it if you want your your "heros" to be worthy of admiration. Read more

See it if You want to see an excellent sci-fi play that was well directed, acted and creative set. It will be loved by sci-fi geeks.

Don't see it if You don't like sci-fi, this will not be your kind of play.

75
Play seems to mainly cater to a ya (young adult) audience, The set-design scores a bull's eye on dystopian sci-fi!, Well-acted by a young and promising acting quintet, Great tumbling fight scenes!

See it if You're a consumer of Young Adult (YA) literature. If you liked The Hunger Games, this play is definitely for you.

Don't see it if Young Adult Dystopian Sci-fi is not to your liking. Read more

See it if You An A Ha moment at the end

Don't see it if You want a clear storyline

See it if You’re interested in watching an ambitious group of young actors take stage in a dystopian thriller.

Don't see it if You won’t be able to get past a rather disorganized and sometimes confusing script. Read more

See it if You enjoy themes of a dystopian society and how young adults deal with societal pressures of a new world.

Don't see it if You aren’t able to extend your imagination, are bothered by minor plot holes or unanswered questions, or don’t do well with loud sounds. Read more

See it if Randall Rodriguez creates an amazing scene. It is very thought provoking. The cast works excellent with each other on stage.

Don't see it if You are not into scifi or do not want something to challenge your point of view.