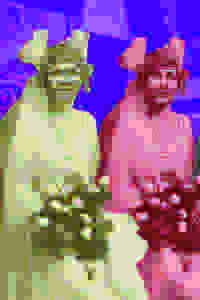 View in admin
The Marriage of Alice B. Toklas by Gertrude Stein
NYC: Soho/Tribeca
81
Score it Scored!

The Marriage of Alice B. Toklas by Gertrude Stein NYC Reviews and Tickets

Untitled Theater Company #61 presents an epic farce set at the fantasy wedding of Toklas and Stein, packed with Parisian expatriate notables of a century ago.

Picasso has brought two of his mistresses and one of his wives. Hemingway has also brought his wife but is more obsessed by his matador. Meanwhile, all involved discuss matters of art, genius, friendship, religion, more genius, sexuality, money, fame, genius again, and, of course, love. Identities are merged and submerged as four actors play more than 30 characters. Written in a style that echoes Stein’s work, this is a comic fantasy with serious intent.

See it if you are familiar with Gertrude Stein. This charming show uses her writing style to tell her story with lots of physical comedy and champagne

Don't see it if you are expecting a traditional play with a plot that progresses logically.

See it if Witty, poignant tale of Stein/Tokas' 'marriage' as if written by Stein herself with puns & convolutions abounding Cast is outstanding

See it if you want to see four gifted actors playing 30+ characters. These actors are a great ensemble!!!!

Don't see it if you have no idea who Alice B. Toklas and Gertrude Stein are. Read more

Don't see it if repetition throws you or non-linear plays confuse you. Fine acting. Intellectual silliness brought to new heights.

See it if you can appreciate Stein's circular thinking and verse. It's not everyone's cup of tea.

Don't see it if you are looking for a straight forward play.

See it if You’re up for an intelligent, well researched, intricately written, entertaining and incisive script performed by an intensely talented cast

Don't see it if You're unaware of the work or influence of Toklas, Stein, Hemingway and Picasso or The Lost Generation in Paris between the World Wars. Read more

See it if Cerebral, but also funny and touching stories interest you. Great acting.

Don't see it if You can't take Gertrude Stein, or you don't like minimally stages shows or actors playing multiple roles.

See it if you like both intelligent and physical humor and are interested in the life and times of Gertrude Stein.

Don't see it if you're not in the mood to think, or don't know anything about the characters.

"'Marriage' is a silly aural pleasure...Stein’s style also serves another purpose: as a marker for the ambiguity that a genius...is able to turn into a weapon against intimacy...Between semi-farcical scenes a quieter drama emerges...What makes the insight fresh in Einhorn’s play, despite the occasional amateurishness of its staging, is the absurdist language in which it’s told. And what makes it painful is the understanding that in every marriage, someone is the genius, someone not."
Read more

"The sort of thing that one chortles through from paragraph to paragraph while unraveling additional meanings until the final period lands...There is so much to slog through, with so little actually happening, that missing even a beat means losing five or twelve points...Thank goodness then for the vivid balls-to-the-walls acting...Though always clever, the proceedings risk becoming exhausting, particularly during the second act...Oh but that ending is a beauty."
Read more

“Einhorn directs his play with a flair for both comedy and complexity. Mia Katigbak stuns with her delivery as Gertrude Stein…Be prepared to be swept away, and suddenly confronted with complexities and philosophies that strike a nerve…The play leaves you breathless and spellbound…Fully realized by a brilliant cast, use of lighting, sound, and costuming…Theatre that needs to be seen, and a dance that needs to be experienced.”
Read more

"A brilliant love letter for Stein and Toklas in the form of a whimsical, furiously funny, and ultimately profound play...Their story is told in a style of self-aware charm, endless pretense, and suspended beliefs...It will make you laugh, and then before you realize it, make you cry as well...The cast is superb. Katigbak and Simon have glorious chemistry...A perfect example of a harmonious co-existence of wild imagination, an excellent structure, and a strong central theme."
Read more

"The highly skilled actors commit passionately...Utterly riveting show. There is an eloquence forcing its way through the shiny surface of quick witticisms and wordy observations that brings meaning and gravitas to the play...Underlying the farcical, high-paced, cartoon-esque moments lie truth and depth, poignantly and subtly lingering as smoke. Thoroughly enjoyable from start to finish, this love story that was, the marriage that should have been, is the play you must see."
Read more

“Einhorn directs with stylized precision, while leaving flexibility for the portrayals…The actors hit their marks with marvelous, in-the-moment-truth...It is clear that they have invested full personal stakes in these portrayals, adding up, through Einhorn’s clever direction, to a masterwork that will not easily be forgotten...A lighthearted, whimsical, funny and yet incredibly profound examination of love, being, identity, and interconnected consciousness.”
Read more

"Stein is the eye of this storm, played with magisterial humility by Mia Katigbak. She is the oracular center on which her coterie of geniuses base their self-attention...Neale as Hemingway is a self-satire tottering on the precipice of tragedy, a tour de force of tortured élan; Harding as Picasso and everybody else is a genius of self-importance and shtick painted thinly over remorse and ambivalence."
Read more

"A farcical frolic with members of Gertrude and Alice’s charmed circle...Mia Katigbak and Alyssa Simon balance powerful moments with sensitive ones and interchange identities...Edward Einhorn’s writing creatively embraces Stein’s verbiage and cadence with his own touches of humor and enough historical references to satisfy the Gertrude and Alice fan, English or art history major, 1920s Francophile, or anyone looking for an enjoyable, thoughtful, theatrical romp."
Read more