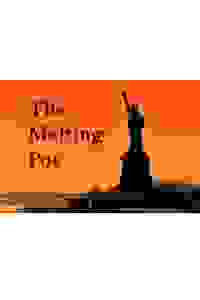 The blossoming relationship between two recent immigrants stalls at the crossroads between promises of the future and horrors of the past in this world premiere drama.

At the turn of a century that feels startlingly familiar, young lovers David Quixano and Vera Revendal enter the American crucible and are re-formed. Through a rich blend of languages, cultures, humor, and music, 'The Melting Pot' weaves text from Israel Zangwill's 1908 melodrama of the same name with voices from the early 20th century culture wars, creating a new work that lays bare the wonders and wounds of immigrant America.

See it if disrupting action with agitprop style political-social commentary works for you. A 1908 play has been overlayed with commentary & music

Don't see it if you expect a fun frolic. Various prejudices are addressed by a multi-racial cast playing anti-Semitic roles while a massacre is described

See it if The story about a man and a woman who grow to love each other he's Jewish she is Catholic. The struggles the Jewish people.

Don't see it if You want flashy or music. Love story Read more

See it if You are interested in old plays brought back to life. This was a little ragged- from horrific descriptions to love stories- but enjoyable.

Don't see it if You don't like rather cliched love stories or historical drama, or lots of stairs to the theatre.

See it if you enjoy adaptations of old plays whose messages continue to resonate and are interested in the immigrant experience.

Don't see it if you are not interested in the reasons for Jewish migration to the US in the early 20th century.

Don't see it if You are expecting great writing

"Lashof has added bits of the original to her modern perspective that all-too-easily shines a light on our current social struggles and uneasy political climate...Underneath the dialogue is a light musical layer created...Off to one side is Nurse who throughout the performance describes the pogrom in Odessa in terrifying and bloody detail. It’s a shocking history, but it never blends smoothly with the rest of the storylines...A thought-provoking opening."
Read more

"Under the direction of Keegan, the play is staged in a minimalistic, almost Brechtian fashion. The actors are all onstage throughout the show...and occasionally even interact with the audience...Gaines stands out as having a charming stage presence in the lead role of Vera...A well-written play, and one of the better pieces I've seen brought to life so far this year...One of those plays that gets better over the course of the night...A political drama just as much as it's a love story."
Read more