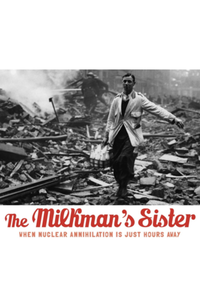 'The Milkman’s Sister' takes place inside a Bronx tenement in October 1962, when nuclear annihilation was seemingly just hours away. Despite a historic last-minute reprieve from atomic disaster, the residents are still devastated. The nerve-wracking countdown to their impending deaths unleashes an explosion of heroism, cowardice, and delusion for an overweight housewife, an unemployed milkman, an angry supervisor of hospital linen, and their neighbors.

See it if you enjoy the tension that fear can create with the ones you love.

Don't see it if you have not lived through the Cuban Missle Crisis or do not have an appreciation for the state of the Cold War world.

See it if you like well made plays with strong monologs. Set on a night when the world appeared to be ending makes it relevant for lots of us today.

Don't see it if violence on stage upsets you. The characters believe the world is ending which releases a lot of truth and pain with some strong physicality

See it if You know someone with the production. You're ready to hear philosophical musings on milk, jigsaw puzzles & jellybeans(really).

Don't see it if You want multi-dimensional characters: each character has 1 trait that will be played again & again. You want a sharp, polished play.

See it if You like shows that are based on historical events. Great characterizations are important to you. Plays about family relationships intrigue.

Don't see it if You are looking to see a comedy. Although there are a few comedic moments in this new play it is thought provoking and serious and terrific

See it if You like plays about historical events. You want to be entertained. You don't mind slow moving scenes. You remember milk being delivered

See it if complex interrelationships, effect of extreme fear and helplessness on them and overwhelming compulsion to status quo fascinate you

Don't see it if you have a short attention span, tire, abhor violence, psychological/physical abuse and stereotypes, or avoid reminders of current threats

See it if you enjoy great acting. All of the cast was excellent; Concetta Rose Rella was amazing!!!

Don't see it if you find watching a dysfunctional family, especially emotional abuse in a marriage, painful; you prefer something light. Read more

"As destruction comes to seem more certain, the characters aim their worries at each other, revealing long-boiling resentments, particularly the strain and abuse that defines the central marriage. Director Joe Battista and the committed cast let the drama run excitingly wild — by the end, the floor is coated in the spaghetti and milk from a dinner gone wrong, the remnants of a family in pieces but still pushing on."
Read more