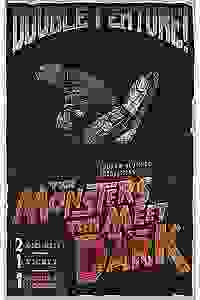 View in admin
The Monsters You Meet in the Dark
NYC: Brooklyn
67
Score it Scored!

The Monsters You Meet in the Dark NYC Reviews and Tickets

An evening of two horror one acts from Human Pincushion Productions, a new company devoted to bringing horror works to the stage.

THE MONSTERS YOU MEET IN THE DARK is a duo of one acts, two terrifying an twisted tales of tragedy and horror coupled together in one thrilling night of theater.

"IT TOLD ME TO" - In the 1970's, after Savannah murders her fiancee at the behest of a demon she is committed to an asylum where she meets Corrie, a young woman who may not actually belong in there. The two form a companionship that is put to the test as the demon continues to demand Savannah commit grizzly acts of murder.

"THE WOODS LISTEN" - A group of old college friends meet to go camping for a weekend to celebrate an engagement. After nightfall, increasingly strange and horrific things begin happening and one by one some are picked off. There is something in the trees that is hunting them. And one of the people in the group may not be who they say they are.

40
It’s really hard to do horror on stage

See it if You enjoy horror and want to see it translated to the stage.

Don't see it if You’re looking for a perfect plot or script. Just have a good time and get a little spooked!!

See it if you are a fan of horror, like simple sets/costumes, and want to support a new theatre company.

Don't see it if you expect a masterpiece or something wholly original. Avoid if you are triggered by abusive relationships or don't like loud screams. Read more

See it if you like horror, and want to support the emergence of on-stage horror!

Don't see it if you expect extravagant sets or costumes.

51
Good actors but direction was lacking, leading to shouty, buffoonish over-acting, Sadly, i found it excruciatingly bad, Very "community theater," see because your friend is in it, Good costumes, Disappointing

See it if You want to support this group; you have a personal connection to the group; you want an excuse to visit Williamsburg.

Don't see it if You find it hard to sit through well-intentioned but bad shows; reminded me of teen theater at the YMCA but with much better costumes/makeup

See it if you like to support one-acts, love seeing interesting technical effects onstage, or are looking for a low-stakes night of spooky stories.

Don't see it if you're looking for a fully developed work that will blow your mind or give you an entirely different perspective on theatre or horror.

See it if you want to support emerging artists; you're a curious horror diehard who wants to see a new co. try their hand at it. Great makeup & sound.

Don't see it if you don't like screaming onstage; violence or implied sexual assault are a trigger for you. Read more

See it if You like horror because this is a wonderful opportunity to see that genre on the stage rather than on a screen.

Don't see it if If you don't like blood or horror/thriller as a genre. Read more