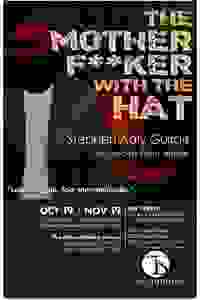 View in admin
The Motherf**ker With the Hat
NYC: Chelsea
88
Score it Scored!

The Motherf**ker With the Hat NYC Reviews and Tickets

Jackie, a petty drug dealer, is just out of prison and trying to stay clean. But he's still in love with his coke-addicted childhood sweetheart, Veronica. Ralph D. is Jackie's too-smooth, slightly slippery sponsor. He's married to the bitter and disaffected Victoria, who, by the way, has the hots for Jackie. And then there's Julio, Jackie's cousin…a stand-up, "stand by me" kind of guy.

See it if You would enjoy a dark comedy / drama about addicts sleeping around, suffering, philosophizing, and trying to improve themselves.

Don't see it if You are looking for a more polished performance. This was difficult material. The spunky young cast was better in some spots than others.

See it if I loved this play. All the actors were excellent. My first time seeing Bobby Cannavale. What a part and what an actor!

Don't see it if You don't like swearing. Lots of it here!

See it if you enjoy wonderful acting and a realistic and compassionate plot; you like being in a very small venue "up close and personal".

Don't see it if your idea of a great night at theater is a large theater with fancy scenery; you dislike foul language and uncomfortable sexual situations. Read more

See it if You are ready for some great acting. You want to have a good laugh. You are not turned off by profanity. You have an open mind.

See it if You like drama with a healthy dose of violence and humor. You like small, intimate, intense plays.

Don't see it if you want to avoid filthy language or infidelity; you've seen it before.

See it if You want to enjoy a great script and can ignore some poor casting choices.

Don't see it if You want the two leads to ring true. This director seems to have taken all the edge/street out of what should be two strong characters.

See it if I've seen the Chris Rock version on Broadway, loved it & wanted to see again. This cast was great. Intimate setting. Felt true & refreshing,

Don't see it if You're opposed to urban comedy, scantily-clad actors, cussing (LOOK AT THE TITLE!!!), tight seating, and if you're sat in the front-the food

"Stephen Adly Guirgis’ heartbreaking script about two f**kups trying hard not to f**k up again has great rhythms, capitalizing on hyper-specific details about New York City and linguistic clues that honor the Puerto Rican heritage of the show’s central characters...Director Peter Jensen builds patient early scenes with this compelling cast, with great, tragic payoff later in the show...The cohesion of this production is also due in no small part to the strong performances of the cast."
Read more

"Now, without a big-name cast or a big space, director Peter Jensen and a top-notch creative team have crafted a compelling production blessed with an equally top-drawer cast...The cast handles Guirgis’s script, a mix of boiling profanity and elevated language, with remarkable naturalism...The acting, script, and direction, enhanced by evocative music, sound, and lighting and by Sherry Martinez’s dead-on costumes, are interlocking facets of a gem of a production."
Read more

"Guirgis’s unabashedly vulgar play explores themes of love, morality and choice in one of the most diverse cities in the world, New York...The play, one of Guirgis’s best, is both hilarious and thought-provoking...Director Peter Jensen keeps the production’s energy high, and scenic designer Miguel Urbino uses sets that are minimal yet functional...'The Motherf**er with the Hat' is a production you won’t want to miss."
Read more