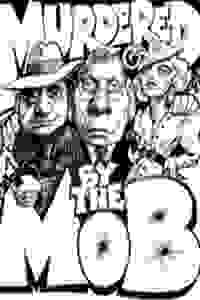 View in admin
Murdered by the Mob
NYC: Midtown W
69
Score it Scored!

Murdered by the Mob NYC Reviews and Tickets

(On hiatus) This two and a half hour interactive comedy mystery features a three course sit-down dinner, dancing, and a private audience with The Mob's new Don. Only playing on Fridays.

The Mob has hit Off-Broadway to celebrate the induction of the new Godfather. Join them for a private audience with the Don, maybe he’ll make you an offer you can’t refuse. Mingle with mobsters and molls, meet the new “Boss of Bosses”, break bread and heads with wiseguys and Mafia princesses. Sure you’ll be rubbing elbows with goodfellas and ducking bullets over Broadway but it won’t stop the fun.

See it if you enjoy interactive shows; enjoy exaggerated stories about the Italian mob. Want an Italian dinner included in the price of your tickets.

Don't see it if you're offended by stories about the Mafia and violence, even though it done in a comedic way. Read more

See it if you want to get sick from their alcohol.

Don't see it if you want to save yourself from the worst play ever. Read more

See it if you are a fan of mystery and comedy

See it if want to be part of a big Italian sit down dinner for an evening, with plenty of drama and finger pointing. Enjoy a good murder mystery.

Don't see it if you are looking for food as good as grandma made.

Don't see it if You do not like Goofy comedies.!

See it if just don't see it. It felt like this was where Broadway performers went to die. Save your money!

See it if You like comedic immersive dinner theatre.

Don't see it if You are triggered by stage violence.