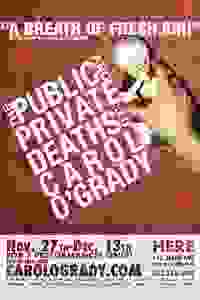 The Public and Private Deaths of Carol O'Grady

It's Christmas. Carol's been murdered. What's next? This darkly comic solo show explores what makes us tick - as friends, neighbors, partners, parents, and people. More…

The lives of several residents of a Long Island suburb are shaken to their core when Carol O’Grady is brutally murdered in her home on Christmas Eve. What follows are those around her desperately trying to make sense of this tragedy. As they begin to deal with this loss, they are forced to confront their own intrinsically complex lives.

Don't see it if Distinctions between four characters ill-defined. Profuse profanity. Line delivery is excitedly too fast, too low, and garbled. 45 min solo.

See it if Murder take place, four characters played by one person.

Don't see it if You want cheer Christmas show.

Also I was confused in the beginning with the actor going from each character. The light on the right side of the stage going on and off, help ones I notice the light. As you watched you see pain come from two of the characters, very deep pain.... Read more Read less

See it if you enjoy seeing how one event, one person is viewed by others. Very good acting of various characters by one actor. Really intense.

Also This actor transforms himself to other characters seamlessly and with great insight into their minds. Fascinating and sometimes very sad.... Read more Read less

See it if you like 1-person shows that have a sprinkle of humor mixed-in w/moments of deep sadness & reflection, + back & forth character transitions.

Don't see it if you're not into 1-person shows. This guy takes you on a roller-coaster ride of emotions, including a lisp & slight physical-impediment.

...unnecessary comb-over??? Couldn't get passed it for the 1st 10min. Neither you nor "Tom" needs it.

Aided by alternating lamps (when Frank Murdocco is "Tom" his living-room lamp would switch on; when he's "Angela" the lamp by the window would switch on & the other would switch off, back & forth for the whole show). Plus, he'd stammer/stutter his last line(s) as he'd transition back into another character. Weird @ first, but you get used to it as the story unfolds.

He DOES speak extremely fast & it can get confusing (especially w/"Angela's" lisp). Also, there are numerous long pauses. We weren't sure if it was a loss of place in the script or done for effect.

We didn't expect the deep emotional moments. He starts off harsh w/his disdain for "Carol", humorously throwing her & "Angela" into the mix w/F-bombs left & right. You don't feel much for "Tom" until later, as more of his own heart-breaking story unfolds.

See it if you like something that is fun and thoughtful at the same time. Very funny but also lots of interesting questions raised.

Don't see it if you're looking for something typical. This is new and refereshing

See it if Are you looking for a new twist on the classic “one-man show?” Then this is a show you absolutely cannot miss.

Don't see it if If you want a mindless, shallow show, this isn’t it. This show dives into a place in your mind that stays with you when you leave.

See it if This show is darkly funny and a lot of fun. A really good time and really interesting too! I really enjoyed it!

Don't see it if Don't see this if you're looking for just comedy.

See it if You're interested in the psychology of human relationships, the fickle stickiness of trauma, or Christmas decorations.

Don't see it if You're not looking for a multi-faceted production that has more than just one genre, theme, and view.

See it if You like a fun solo show that’ll take you on an adventure.

Don't see it if You don’t like twisted humor

See it if you want a truly unique, and somewhat existential, show that explores the trials of suburban social life. It's also absolutely hilarious.

Don't see it if you want a traditional Christmas show.

See it if You’re into Christmas-y Anna Deavere Smith on crack.

Don't see it if You don’t like dark comedy

See it if you want to see a really interesting solo show that explores a fascinating story. It's also pretty funny and heartbreaking.

Don't see it if you're looking for just comedy. It gets dramatic too

Don't see it if You don't like curse words.

“The Public and Private Deaths of Carol O'Grady” hasn't been reviewed by any Critics (yet!) 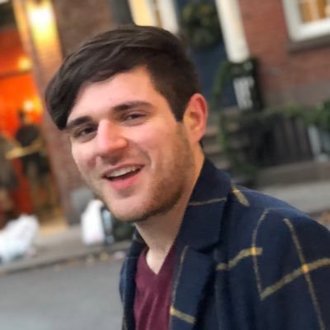 Frank Murdocco
Writer / Performer
Get Alerts Alerts On Alerts Off 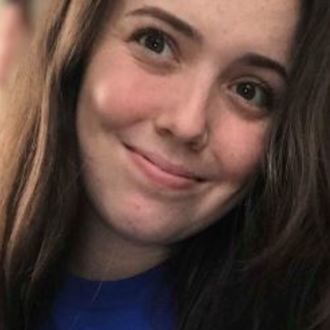 Jessica DiPaola
Director
Get Alerts Alerts On Alerts Off