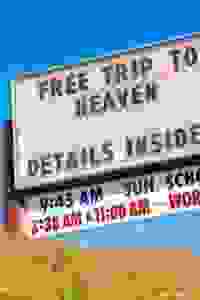 Me & She and Manytracks present a theological comedy telling a story in which a crisis of faith arises when seemingly similar beliefs are discovered to be worlds apart.

It's Christmas time in Georgia as two Catholic spinsters are suddenly thrust into a verbal smackdown with a perky evangelist who has arrived at their doorstep to save their souls. With their comfortable equilibrium threatened by this intruder who denounces the Catholic faith, they enlist the help of parish priest Father Murphy. Murphy is furious once he realizes the sisters' intention that he play devil’s (or God’s) advocate, and eventually the evening comically dissolves into personal confrontation and revelation.

See it if you like to laugh at Southerners.

Don't see it if you like deep theological discussions.

See it if Don’t see it

Don't see it if Don’t see it

See it if You like a good debate, solid acting, and unique venues.

Don't see it if Theological discussions aren't your thing. .

"Though this is a revival, the script did not always feel fully finished to me...Catholics and Evangelicals may find this debate intriguing and entertaining. But as an outsider to both faiths, I have no skin in the game, and so I found my interest waned. I’d like to be able to say that this play offers a universal exploration of conflicting religions. But it’s a thorough exploration of Catholicism versus Evangelicalism and if you have no investment in either faith, this may not be your cup of tea."
Read more

"Hilarious, enlightening and gripping...There are marvelous one liners and good character development. But the play loses steam, ending with a whimper, rather than a bang. If it were cut by five or ten minutes toward the end, it would be more powerful. That said, the performances were splendid, as was the direction by Katrin Hilbe. The writing is mostly interesting and probing."
Read more