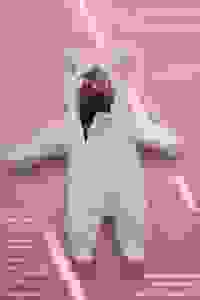 The Singularity NYC Reviews and Tickets

Virago Theatre Company, dedicated to producing new work by Bay Area writers, and the Flea, downtown beacon for bold and inventive work, present the New York premiere of a futuristic comedy set in a lunatic world.

Astrid wants a baby bad but she’s on her last egg, and the only available sperm donors are bat-shit crazy. Jetting from an ex-veterinary clinic reeking of cabbage to the absolute edge of the universe, she’s gotta get some before her clock runs out! Even if it means taking matter…into her own hands.

"I was thoroughly engaged by the first half of the play, but I found the tonal switch to sci-fi to be jarring, and the ending unsatisfying. No explanation or justification is given for Astrid’s actions in the final third of the play. In addition, the scenes with the scientist feel disproportionately long, compared to her interactions with the other men...Overall, 'The Singularity' is an intriguing and worthy concept to explore, but the play just ends, rather than giving us any idea of how the plot is wrapped up."
Read more

"'The Singularity' is most successful when playwright Jackson embraces the strangeness of the world she has created. This is true in larger narrative senses, such as with the human/dark matter hybrid that the play creates...Ultimately, this daring bit of stage futurism fails to live up to its conceptual potential – the play doesn’t dig deep enough into its own suggestions. But Jackson’s writing hints at a greater imagination that might manufacture more fully-formed futures."
Read more

"The problem with this show is twofold. We never care about Astrid and the show has no pay off...Amy Fowkes directs this show inconsistently, with this piece neither coming off as real or farcical...Ms. Jackson’s play has moments where she taps into something relevant and thought provoking, but she needs a stronger ending for the play to connect."
Read more

"Funny, sometimes delightfully campy, but sometimes enervating...There’s a lot to admire in the production besides the cast. Director Amy Fowkes makes creative use of Mikel Glass’s vivid sets...Though I left wishing for more tonal consistency and a more satisfying ending, I’m glad I went to see 'The Singularity.'"
Read more

"Title is misleading, the set and opening image set the audience up for a very different play than what follows...Nothing announces this is a comedy. It’s a deep hole to climb out of, and one the play struggles with throughout...If you’re intrigued enough by that to seek out the how and the why I won’t spoil any more. For the rest of you, I’ll say it is neither scientifically accurate (natch) nor highly theatrical."
Read more