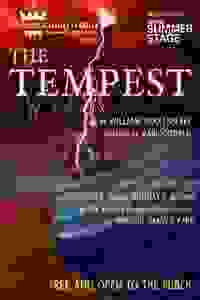 Free to the public, Classical Theatre of Harlem's production of Shakespeare's late romance is set on the island of Hispaniola, home to the Dominican Republic and Haiti.

The Tempest is a theatrical “gumbo”, with an intricate blend of usurping villains, youthful romance, music, magic, humor, and conspiracy. In this play, Shakespeare gives us such iconic characters as Ariel, Caliban, and our protagonist Prospero, whose quest for justice leads him to become unjust himself. Prospero’s magical island could be anywhere. The history of Haiti is nothing short of magical: this tiny Caribbean country won its independence by defeating three European superpowers: France, Britain, and Spain, demonstrating the same fighting spirit found in Caliban, and the same longing for freedom as Ariel. 'The Tempest' highlights the dynamics of freedom and captivity, imprisonment and rebellion, authority and tyranny.

See it if you want to see free Shakespeare in the Park but can't wait all day in line at the Delacorte - this was a high-quality production.

Don't see it if you're not a fan of the bard.

See it if An intelligent enchanting take on Shakespeare's play with powerful and witty performances and music. A healing experience. Graceful.

Don't see it if If a slightly storybook approach to this play bothers you, this may not be for you

See it if you love Shakespeare plays in 90 minutes, free theater, inspiring cultural adaptations. Theater that serves its community.

See it if dynamic production in large public park stage with clever set that required much energy. Actors met the challenge with vigor. Felt magical

Don't see it if you prefer frumpy indoor productions.

Don't see it if you never read the book

See it if LOVED EVERYTHING ABOUT IT!!!

Don't see it if this has always been my favorite play

See it if You love classic, old plays and hate clichés

"This is a beautiful yet uneven production, parts of which just don’t work. But it’s ambitious; studded with bits of French, Spanish and Creole; and enlivened by music and a smattering of dance that will make you wish for more. What’s good in it is enough to make it an energizing experience on a balmy summer night."
Read more

"Mixed-bag performances and a patchy sound system nag...Vibrant, if overflowing, vision that packs a lot of ideas into a streamlined 100 minutes. Cofield has called the play 'a theatrical gumbo.' Not every ingredient is edible."
Read more

"The production has distractions, including a few weak cast members. In adapting the text, the creative team has skewed the play's pacing; some longer expository scenes could have been tightened up. The sound is also managed so that actors' microphones often pick up mid-sentence. These minor qualms aside, 'The Tempest' is such stuff as dreams are made on--an open-throated, resonant production by an upstart theatre company, reminding us not to take freedom for granted."
Read more