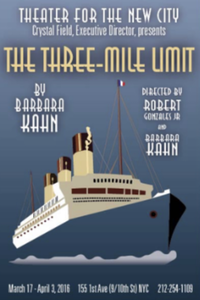 Theater for the New City presents this drama set aboard a transatlantic ocean liner in 1927, where the conflicts and prejudices of the era are played out en route.

A transatlantic ocean liner carries both real-life and fictional characters in this new play. Conflicts arise from class and ethnic differences, race relations, and sexual identity. Alla Nazimova, famous star of stage and film; Florence Mills, African-American singer who is returning from a triumphant European tour; Beniamino Gigli, popular Italian tenor looking forward to playing New York’s Carnegie Hall; a young woman from Russia wondering if her husband from an arranged marriage will meet her on arrival; an American crew member who has been living a lie; and a wealthy Southerner traveling with his mistress who still hopes for marriage and respectability. As all of these passengers meet and collide, their differences are made apparent.

See it if You love music

Don't see it if If you don’t like music