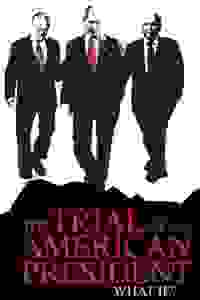 View in admin
The Trial of an American President
NYC: Midtown W
73
Score it Scored!

The Trial of an American President NYC Reviews and Tickets

For the first time in history, an American President is on trial for crimes against the world. Will our 43rd President be found guilty of launching an illegal war that caused civilian deaths, spawned the growth of Al-Qaeda and ISIS, and inspired the use of brutal torture? Or will he leave a free man? 'The Trial of an American President' takes you inside a heated courtroom, where George W. Bush defends himself as a jury selected from the audience determines his fate.

See it if What if president Nixon did not resign? The play explores that.

Don't see it if Direction was all over the place and so was the acting. The good the bad and the ugly

See it if you want a biased and simplistic presentation of complex historical events. Would have been a great idea if a compelling debate was written

Don't see it if you are irritated by biased and simplistic presentation of historical events and characters. there is no argument made for or by Bush. Bore

Don't see it if Could have been better

See it if you're a political junkie who is well-versed in the Bush years, you like audience participation, you like talky shows

Don't see it if you aren't interested in politics, you need something zippy with a lot of plot, you can't handle discussion of war crimes

See it if You want an entertaining discussion after the show.

Don't see it if Could spend your money better elsewhere

See it if You want to see a completely unbelievable scenario manipulated to try and somehow produce an unbiased trial.

Don't see it if unless you have an overwhelming urge to see George W Bush say and do things that he would never say or do.

"It's a rather sleepy exercise in self-righteous indignation masquerading as an honest examination of one of America's greatest blunders...With a script so heavily weighted against Bush and an audience predisposed to abhor him, there is never any doubt that Bush will be convicted by a wide margin...The entire 75-minute affair is more a liberal revenge fantasy than a genuinely gripping courtroom drama...Stephen Eich directs a technically proficient production that occasionally verges on camp."
Read more

"If you're expecting that the point of staging this mock trial is to provide fresh insights into the disasters of the Bush Administration, you've come to the wrong place...That Tony Carlin isn't very effective as Bush is hardly his fault...Tarlow is unwilling to allow for the ambiguity or clash of ideas that might create real drama...The only thing that keeps Stephen Eich's production watchable is its slick design...Even a really terrible president deserves a better play than this."
Read more

“Trial is stacked against Bush from the get-go. The director, the author and probably the actor seem to have decided to make Bush full of twitches, nervous eye movements and religious fervor. Had Bush been portrayed as a stronger man who truly believed in what he did, the play might have had a dramatic spine. The very fact that after being convicted by a jury of audience members, Bush’s last word is a tearful outcry—’Laura’—serves to induce not empathy, but pity.”
Read more

"A most interesting theatrical experiment...There is splendid use of technology, with voiceovers and videos...The play, by Dick Tarlow and Bill Smith, is so well crafted that arguments ensued after the last curtain call and the house lights were on. Heated exchanges among audience members, between husbands and wives, continued from the theater to the lobby, the elevator and the ladies’ room. The excellent direction is by Stephen Eich."
Read more

"Despite all its good intentions, it's not a very good play...Carlin does his best to make us buy into the Bush persona. Unfortunately his best isn't convincing enough to buy into the conceit of the set-up...'The Trial of an American President' warrants a flunking grade...Unless the Bush and Cheney families decide to attend a performance, it's a pretty sure bet that Bush's fate will be the same for most of the play's run...Enlisting the audience to serve as jurors is ineffective and gimmicky."
Read more

"To be sure Mr. Carlin has perfected a serious vocal imitation of GWB, and if you close your eyes, which you will be tempted to do, the effect is chilling...This is a court that bears no resemblance to a court. A trial that doesn’t sound like a trial. A narrator that has no reason to be there except for exposition–and too much of that will smother a story. The result is a mash-up of good intentions, fact, and no drama...Good intentions and no structure do not a successful combination make."
Read more

"For the many who believe that Bush not only began an unjustified war in the wake of 9/11 but incited problems that have become exponentially worse with the rise of ISIS, among other cancers, seeing him as an ICC dartboard target will likely be a mild cathartic, no matter how rigged against him the playwriting may be...If you weren’t paying attention back then, consider this play a valuable history lesson. If you were, you won’t hear anything you didn’t already know."
Read more

"An earnest, informative and flawed mock trial...It behooves the authors to have been more diligent in the presentation of their research. This is especially true if they are going to ask the audience to make a judgment based on it....A more trustworthy presentation would have been much preferred to the clunky efforts of the production to suggest the trappings of the court, such as portentous echoing sounds and some tin-ear exposition by 'the narrator.'"
Read more

"This show is timely and perfect for the political junkies out there...Mr. Carlin is a believable Bush, complete with accent and deer-in-headlights look. Mr. Rogers is authoritative and demanding, and drives home the point. Ms. Kakkar is perfect as the Narrator, whose soothing voice adds just the facts in a no-nonsense tone. They are all perfectly cast...Stephen Eich’s direction drives the point home, though at times it becomes monotonous."
Read more

"Tony Carlin plays an earnest former President who is convinced of his righteousness but not arrogant or prideful...The play is documentary in style, grounded in historical evidence, legal argument, and reference to international treaties and conventions...Although the verdict, left up to the audience, is pretty much a foregone conclusion, it is the detail that is finally so impressive...Some might say 'Trial of an American President' is a beautifully dramatized trial and not theater at all."
Read more