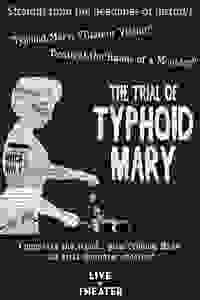 View in admin
The Trial of Typhoid Mary
NYC: Lower E Side
79
Score it Scored!

The Trial of Typhoid Mary NYC Reviews and Tickets

Live In Theater presents this immersive and interactive production, where participants from the audience will play members of the defense, the prosecution, and jury in the infamous 1915 trial of Typhoid Mary.

March 1915. New York City health officials have apprehended 45-year-old Mary Mallon, better known as “Typhoid Mary," for the second time after linking her to another typhoid fever outbreak. Mallon is accused of having infected 51 people with typhoid fever, three of whom have died.  This experience will transport participants into what would have been the controlled chaos of such a sensational case. They will delve into the inherent entertainment in high profile “trials of the century," while dissecting the case of the woman known at one time as the deadliest in the world. Come give Typhoid Mary the trial she never received.

70
Too long, Hit-or-miss, Interesting for awhile

See it if You enjoy immersive, improv work that depends heavily on audience participation to advance its story. Some of it works. Just long/repetitive

Don't see it if Hate this kind of show. Relying on skill of AUDIENCE members would make you cranky. You're claustrophobic, easily bored. Read more

See it if You enjoy immersive theater with a talented troupe of actors. Even if you know the history of Typhoid Mary.you will entertained.

See it if See if you like to be surprised by a play.

Don't see it if If you like to just sit back and enjoy the good acting and story line.

See it if you want to be "in the room where it happens". This is a participatory immersive historical fiction performance - actors, ringers and you!

Don't see it if you can't write with a pencil, you can't layer up or down with the temperature and you find it hard to hear speakers in noisy rooms. Read more

See it if you enjoy silliness, looking for something different &/or like to be apart of the show. The actors were great & very much in character.

Don't see it if The investigation, the scripted heckler and the audience becoming the prosecutors took away from the quality of the play.

See it if You want a great immersive experience, enjoy court room drama and are willing to get stuck in!

Don't see it if You want traditional theatre, or everything to be done for you - you have to make the effort in this one to get the most out of it

See it if You enjoy small, interactive theater experience with lots of audience participation. You are interested in NYC history or Typhoid Mary.

Don't see it if You are not comfortable being approached by actors and other audience members or you do not want to participate any more than just watching.

78
An immersive interactive experience based on a real case.

See it if You are curious about interactive theater or are an NYC history enthusiast. Great cast, drinks, laughs and pressing social matters.

Don't see it if You don’t like to interact with actors and other audience members.

"A true time-travel experience. Every last actor is completely in character from the second their guests arrived to the second they leave...It is a clever game of chance, giving Mary the trial she never received in real life, several times over...This theatre company gives her back her humanity and the compassion she did not receive from her fellow New Yorkers while still alive, and it is a truly beautiful thing. Bravo!"
Read more

“The likable ensemble embraces the interactive format of the show, with each character improvising a good deal of their own dialogue...One strange and somewhat distracting choice, however, is the incorporation of audience cue cards...If there is more complexity behind Mallon’s choices or her unfair treatment by authorities, the production should frame that conflict more clearly...All in all, however, an enjoyable and unique way to spend a Saturday afternoon in NYC.”
Read more