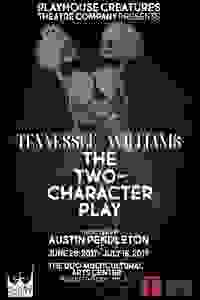 Reality and fantasy are interwoven with terrifying power as two actors, brother and sister, find themselves deserted by their troupe in a "state theater of a state unknown." Faced (perhaps) by an audience expecting a performance, they enact 'The Two-Character Play,' an illusion within an illusion.

See it if you like experimental theater. This is NOT Glass Menagerie. There are moments of TW poetry and insight, but also strange absurdist content.

Don't see it if you want full comprehension. Lots to chew on, but no clarity. Theater is hot (hand-fans noisy). Ironically, the play's set in a cold place. Read more

See it if You want to see a seldom seen Tennessee Williams play. Acting is fantastic. Direction is as interesting as the play itself.

Don't see it if You want a show that spoon feeds you. This is odd and quirky and at times intense but seldom clear in its message till you see the entirety.