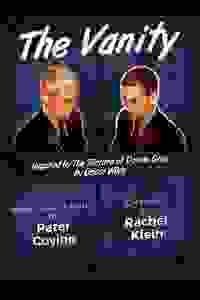 The Vanity NYC Reviews and Tickets

It's 1947 and Julian Gray, a beautiful but sheltered young Plantation heir, decides to start a new life in Hollywood. He finds himself the object of all sorts of attention when the great director Hilton Wheeler casts him as the lead in a major motion picture. Julian falls in love with Stella, a makeup girl on the set of his first film. But all hell breaks loose when he inherits a mysterious Victorian vanity table, which turns out to be possessed by a powerful demon. Julian is offered the chance to maintain his good looks indefinitely, as long as he agrees to forsake love in favor of hedonistic pleasure.

See it if you are interested in anything Dorian Gray, liked The Picture of Dorian Gray, and do not mind a confusing story and over the top characters.

Don't see it if you prefer a well developed story and relistic characters.

See it if if you need to see the most aptly titled piece of theatre you'll likely ever see.

Don't see it if Just don't. It's very rare to find a production or piece of theatre so thoroughly wrong that it has nothing to recommend it; not a moment or Read more

See it if you have no knowledge of the story/film, or if someone is paying you large sums to see it, and buying you dinner.

Don't see it if You have anything at all better to do. I must admit I left at the interval. It was intellectual/emotional self-flaggelation.

See it if you know someone in the show. Otherwise, steer clear. Even Dorian Gray would be screaming, "D'AH F'UH???" if he'd sat through this mess.

Don't see it if it ever comes back. Poorly produced, terribly weak "singing", amateur "acting", silly staging. And these guys are NOT new to this business!

See it if like musicals remincent of 'Phantom of the Opera'. I am not sure if this was supposed to be serious or a spoof of this genre.

Don't see it if don't like musicals and fantasy subjects.

See it if Like story of Dorian grey. Some parts very humorous

Don't see it if if you are seeking a well developed script and very good music.

Don't see it if you cannot take a joke Read more