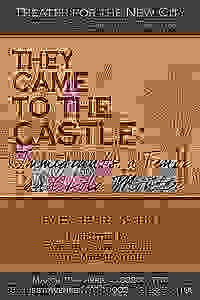 View in admin
They Came to the Castle: Immigrants, a Tenor and Lola Montez
NYC: East Village
71
Score it Scored!

They Came to the Castle: Immigrants, a Tenor and Lola Montez NYC Reviews and Tickets

Set in the mid- 19th century at the pre-Ellis Island entry point to the United States, this historical drama sees newly-arrived travelers share their reasons for immigrating and their hopes and dreams.

An Irishman who escaped the famine meets a free-born African-American woman in his adopted country. An Italian who escaped from forced child labor in the mines of Sicily finds love in New York. The sole survivor of a pogrom (organized violence against Jews) in a Russian village seeks safety in America from anti-Semitism and her own memories. A woman who “always felt different,” refused an arranged marriage in the old country and seeks a new life with another “different” woman. The building was briefly used as an entertainment center, with performances by famous and not-so-famous performers. In a reimagining of a night of entertainment at Castle Garden, the prominent Italian tenor Lorenzo Salvi performs along with the infamous Lola Montez, dancer, and courtesan, who recreates her notorious “Spider Dance.”

See it if you'd enjoy the immigration experience of the early 20th Century told in small episodes followed by entertainment of the time. Kudos to cast

Don't see it if you want a polished production - here there is some lack of eveness in talent to make this move along on a basic set.